Add to or correct this story with a few clicks.
Archive Report: US Forces 1941 - 1945 Compiled from official National Archive and Service sources, contemporary press reports, personal logbooks, diaries and correspondence, reference books, other sources, and interviews.
We seek additional information and photographs. Please contact us via the AddInfo button, or send us email from the Helpdesk. 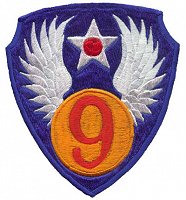 Location: Between Udler and Brockscheid, 5 miles south of Daun, Germany 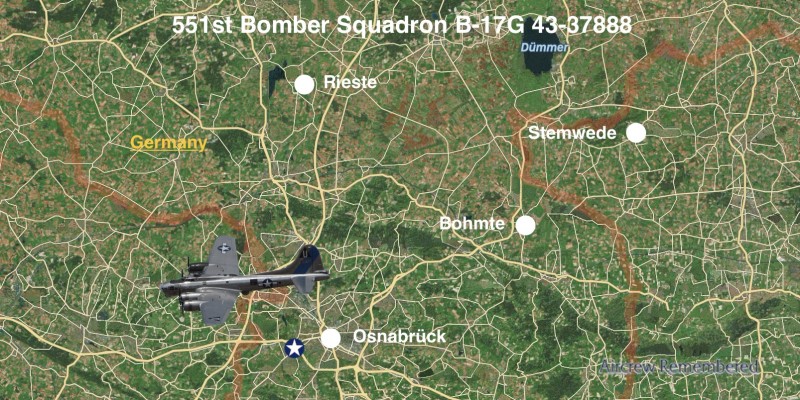 The 391st Group action report recorded that the heaviest losses sustained by the 391st BG in a single operation occurred on this day. Upon completion of the second bomb run on the railroad viaduct, the flights were attacked by an estimated 50 to 75 Fw-190s and Bf-109s, attacking in waves of 10 to 15 aircraft to the rear of the flights. As a result 16 B-26s were reported as missing in action and the returning planes were badly battle-damaged.

After action reports from other aircraft in the formation witnessed 42-107747 dropping back with its landing gear down and both engines smoking. None of the eyewitnesses saw any parachutes in the air prior to the aircraft disappearing from view about 3 miles east of Ahrweiler.

In 2nd.Lt. Bovie’s Individual Casualty Questionnaire he describes how the aircraft started to spin at around 6000 feet and although he and one other of the crew managed to bail out he thought there was too little time for the other four to escape the aircraft before it crashed. After he was captured 2nd.Lt. Bovie saw the bodies, the day after the crash, of 1st.Lt. Abraham, S/Sgt. Wilson, T/Sgt. Lemon and S/Sgt. Christiansen in the aircraft wreckage. He saw another parachute directly above him when he bailed out of the aircraft but lost sight of it when his opened. He speculated that this was S/Sgt. Murphy as he was not amongst the dead crew members.

(1) It is unknown who captured S/Sgt. Murphy or when he was captured but he was held in the vestry of the St. Martin church in Schalkenmehren together with S/Sgts. Celeste and Carino and T/Sgt. Swenson, from B-26B 42-96182 'Miss Furie' who had also been taken prisoner in the same area.

In the late afternoon or early evening the four PoWs were marched to Daun, a distance of some 3 miles. Earlier that day at about 1525 hours, Daun had been bombed, probably by a stray aircraft jettisoning its load. When the four PoWs were led into town, houses were still burning and salvage workers were clearing rubble. According to an eyewitness, the PoWs were being beaten by their guards with boards and sticks when he first saw them. People in the street, among them soldiers of the Großdeutschland Division, Organisation Todt (Civil and engineering organisation) members, and even a member of the Polizei (Police) joined in with whatever was to hand. Several of the perpetrators were identified and named by eye witnesses but were never apprehended.

About 30 minutes later all four of the airmen were unconscious and were thrown into a bomb crater. An unknown Wehrmacht decorated Hauptmann was observed to fire so called “mercy” shots at the unconscious airmen. Young Wehrmacht recruits were also seen to fire at the bodies, as if on target practise. When they had finished a voice was heard to say that whoever could use something should take it. Thereupon 15 to 20 people rushed towards the crater and looted the bodies after which the crater was filled with rubble and dirt.

After American troops had taken Daun, they were informed of the killings. On the 23rd March 1945 the four bodies were exhumed from the crater and taken to the American Military Cemetery at Hamm in Luxembourg, for examination, identification and proper burial. Investigators found that the injuries sustained by the four airmen were consistent with the attacks described by the eye witnesses.

The investigation faced huge difficulties because the Daun population kept silent. The investigators listed 6 possible perpetrators and 10 possible witnesses. In the end only one, a Johann Billen, a former policeman, was left to stand trial. He was served the charge on 7th July 1947, however on 8th August 1947, the chief of the Trial Branch, Leo M. Goodman, wrote in a memorandum that an important witness, a boy aged seventeen years, could not identify with certainty the accused. After consultation with one Lt.Col. Ellis he closed the case “because of improper identification” and the main suspect was released. After almost two years of investigation no one was held to account for the four murders.

Researched by Traugott Vitz and Ralph Snape for Aircrew Remembered and dedicated to the relatives of this crew. Thanks to Hermann Josef Stolz for making available his research article “Was in den letzten Kriegsmonaten in Daun geschah”, published in (ed.) Frank Güth / Axel Paul, Arbeitsgemeinschaft Luftkriegsgeschichte Rhein / Mosel e.V., Aachen 2003, p. 121-124, and for his support by sending copies of the documents he collected, and for giving further information via telephone. Thanks also to Traugott Vitz for his work on the ‘VitzArchive’.

All site material (except as noted elsewhere) is owned or managed by Aircrew Remembered and should not be used without prior permission.
© 2012 - 2021 Aircrew Remembered Last Modified: 20 December 2020, 09:59
If you would like to comment on this page, please do so via our Helpdesk. Use the Submit a Ticket option to send your comments. After review, our Editors will publish your comment below with your first name, but not your email address.