We seek additional information and photographs. Please contact us via the AddInfo button, or send us email from the Helpdesk.
Standartenführer Fritz Bollenrath

* ‘SA’ being an abbreviation for Sturmabteilung – a paramilitary organisation of the Nazi party. 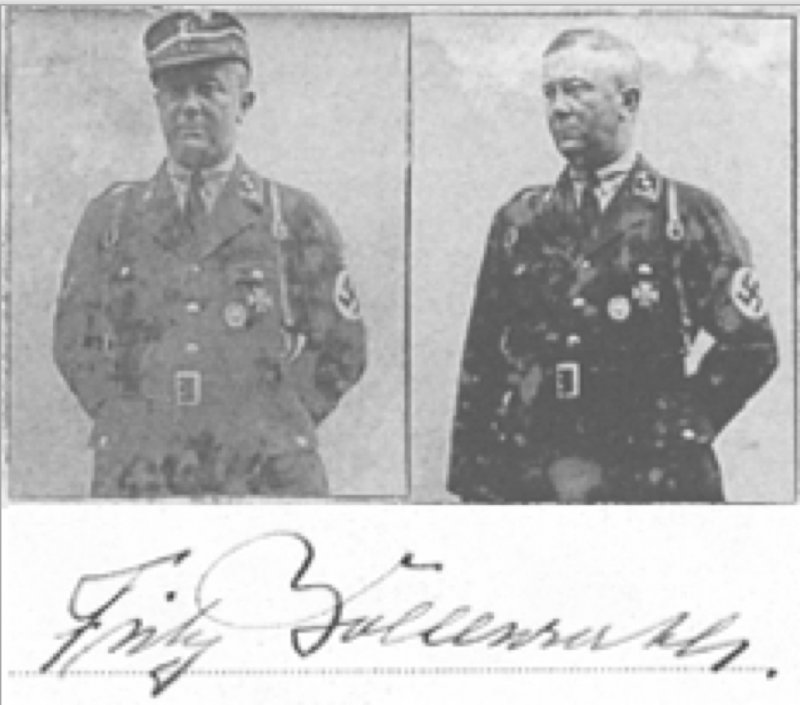 He was born April 21st, 1892 in Cologne, Germany, into a family which originally stemmed from (Bad) Münstereifel in the Eifel mountain range. The name can be traced back in that region for several centuries and features an 18th century painter, a priest, a teacher, and civil engineers: an educated middle class family with Roman Catholic background.

He was educated at a Gymnasium (grammar school) and afterwards worked some time in a machine factory, then graduated in Mechanical Engineering after three years of study.

When war broke out in 1914, he volunteered and served in the German Imperial Army, mostly in cavalry units, till July 1919. He was wounded seven times and was awarded the Iron Cross 2nd and 1st Class plus the Wound Badge in gold. He left army service with the rank of Oberleutnant (1st lieutenant).

He immediately joined right-wing organisations (among which notably the Organisation Consul (O.C.) which was an ultra-nationalist, antisemitic and anticommunist terrorist organisation active in Germany from 1920 to 1922), was a member of the infamous “Freikorps Lichtschlag“ and took part in the so-called Ruhr campaign opposing the French/Belgian occupation of the Ruhr (January 1923 ff).

In an “Addendum to Curriculum Vitae Bollenrath“, written for his SA personnel file, he himself writes: “In March 1923 I fought again against the communists until April brought the climax in Mülheim-Ruhr. During the fights in and around the Mülheim town hall I shot dead 5 communists and knocked down a 6th with a hammer while making a sortie out of the town hall.“

In about 1925 he married Elisabeth “Lilli“ Kiesler (13 Oct 1900 in Charlottenhof, Schivelbein county [today Kluczkowo, Poland]). Between 1926 and 1931, two sons and two daughters were born of whom the youngest boy died as an infant. Bollenrath's wife was Protestant, while he himself came from a Catholic family. Some time between 1934 and 1941 the entry on his registration card was changed to “gottgläubig“ which means “deistic“ i.e. he left the Church.

In 1926, he moved to Münster in Westphalia and took residence in no. 19, Heerdestraße. One year later, the family (now including the eldest daughter) moved to no. 27, Habichtshöhe, a nice semi-detached house near the Aasee, a lake within the town.

On 7th November, 1932 he became a member of the NSDAP (=Nazi party; membership no. 1404392) and of the SA on the same date. He was promoted to Obersturmführer (1st lieutenant) within two years and was employed as a riding instructor within the Reiter-SA, the cavalry part of the SA.

From January 1934, he was the leader of the Reiter-SA at Münster (standard 66) and until 1938 rose to the rank of Standartenführer (colonel). It is in this capacity that he is mentioned as having taken part in the November Pogrom (“Kristallnacht“) at Münster.

According to data kept at the residents' registration office, he joined the Wehrmacht in May 1940 but returned in September of that year.

One year later he moved to Rheine where, according to statements made by witnesses in the Rheine Airfield Trial, he was Standartenführer of the Rheine SA and leader of the Rheine outpost of the SD (=Sicherheitdienst, Security Service – the intelligence department of the SS). One witness said he was residing in the neighbouring town of Neuenkirchen in 1943. When the Volkssturm (national militia, German “Home Guard“) was founded in October 1944, Bollenrath became its local Staff Leader, and allegedly he was also responsible for the “Heimatflak“ (auxiliary anti-aircraft batteries manned by youths).

According to statements made during the trial on 7th March and 1st April, 1947, he killed himself on 5th December 1945 at Konstein, shortly after being arrested.

If you would like to comment on this page, please do so via our Helpdesk. Use the Submit a Ticket option to send your comments. After review, our Editors will publish your comment below with your first name, but not your email address.
A word from the Editor: your contribution is important. We welcome your comments and information. Thanks in advance.
Monitor Additions/Changes?Click to monitor changes to this page. Create account for first monitor, thereafter monitoring is very fast. Click to close without creating monitor
#