On the morning of the 20th July 1944 this aircraft took off from the San Giovanni field, located approximately 8 km WSW of Cerignola in Apulia in Italy, on a mission to bomb the Luftschiffbau Zeppelin aircraft factory at Friedrichshafen on the north shore of Lake Constance, Germany.

After action statements reported that the aircraft was hit by a flak burst between #3 and #4 engines setting the wing ablaze followed almost immediately by an explosion breaking off the wing at #3 engine. The aircraft then went into a dive and flat spin over the target area and crashed at 10:56 hrs 2 km north of Berg and 2 km NW of Ailingen. Nine of crew were recovered from the burned out wreckage. The one crew member who bailed out was taken prisoner in Ailingen by a member of the Landwacht (Rural guard). 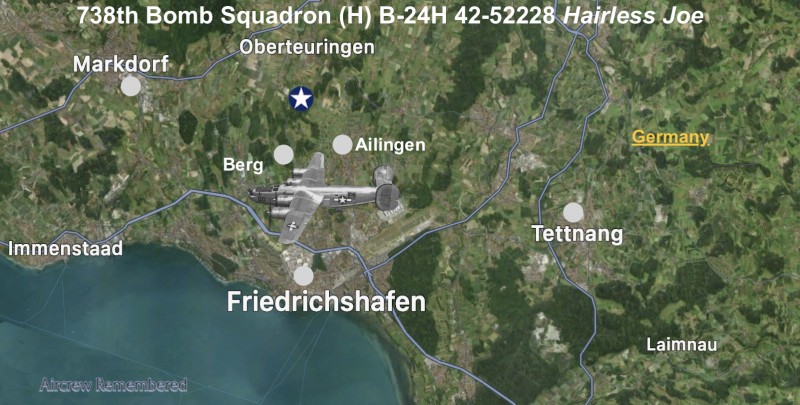 (1) The circumstance leading to the death of 2nd Lt. Scott were determined by a General Military Government court which was convened at Dachau between the 5th July and 7th July 1947.

On the first count they were charged in that they did, at or near Friedrichshafen, Germany, on or about the 22nd July 1944, wilfully, deliberately and wrongfully encourage, aid and participate in the killing of a member of the United States Army, believed to be Arthur M. Scott, who was then and there a surrendered PoW in the custody of the the then German Reich.

On the second count they were charged for being members of organisations declared criminal by the International Military Tribunal.

Hans Seibold who was the former Kreisleiter (Nazi district leader) of Friedrichshafen and a member of the Nazi party;

Albert Schraff who was the former Bürgermeister (Mayor) and Ortsgruppenleiter (Nazi local group leader) of Ailingen, and a member of the Nazi party;

The court heard that on or about the 20th July 1944 following an attack on Friedrichshafen and Ailingen, Germany, an American airman believed to be Arthur M. Scott, parachuted from his disabled aircraft and landed near Ailingen, where he was immediately taken into custody and confined in the village jail under the control of Schraff.

The next day on the 21st July Schraff notified Seibold of the situation. Seibold instructed Schraff in writing that Bormann’s order stands and he should act accordingly, which was interpreted, albeit incorrectly, to kill the airman.

Martin Bormann issued a series of orders and decrees to the Nazi party leaders dealing with the treatment of PoWs. Seibold was referring to a circular dated the 30th May 1944 which was not an order if taken literally but was understood as an instigation to kill.

The circular stated. “During the past weeks English and North American fliers have repeatedly been strafing children playing on playgrounds, women and children working in the fields, ploughing peasants, vehicles on the highway, trains, etc., from a low height, thus murdering in the most despicable manner defenseless civilians-especially women and children. It has happened several times that members of the crew of such aircraft who had bailed out or made a forced landing, were lynched on the spot by the highly indignant population immediately after their arrest. No police or criminal proceedings have been taken against citizens who have taken part herein.”

Schraff summoned Müller and a Helmuth Hauser to his office and showed them Seibold’s order. The airman was loaded into Schraff’s vehicle and, accompanied by Müller and Hauser, they proceeded toward Ittenhausen, some 58 km to the north of Ailingen. They halted near the Unterraderach firing range located about 3½ km east of Ailingen. Here, Schraff claimed that Müller and Hauser exited the vehicle with the airman and he drove a short distance to turn the vehicle around. When he returned the airman was dead. He had been shot twice once to the body and once to the head.

They loaded the airman’s body onto the trailer attached to Schraff’s vehicle and drove to the Friedrichshafen Cemetery where they left it outside of the morgue. The next day body was taken by persons unknown and pushed into a bomb crater near the cemetery.

A few days later Schraff reported to Seibold and informed him that whilst he was transporting the airman to a nearby Flak garrison the airman was shot and killed while trying to escape, a fabrication to justify the killing.

When the body was recovered by the American authorities it was found that the airman had suffered a fatal small calibre gunshot wound to the temple.

The court rejected the claim of ‘Superior orders’ and found all three of the accused guilty on both counts of the charge.

Müller was sentenced to death, but this was commuted to life imprisonment which was later reduced to a 20 year term and he was paroled in February 1954.

It is not known why Helmuth Hauser was not before the court to answer for his part in the killing of 2nd Lt. Scott. 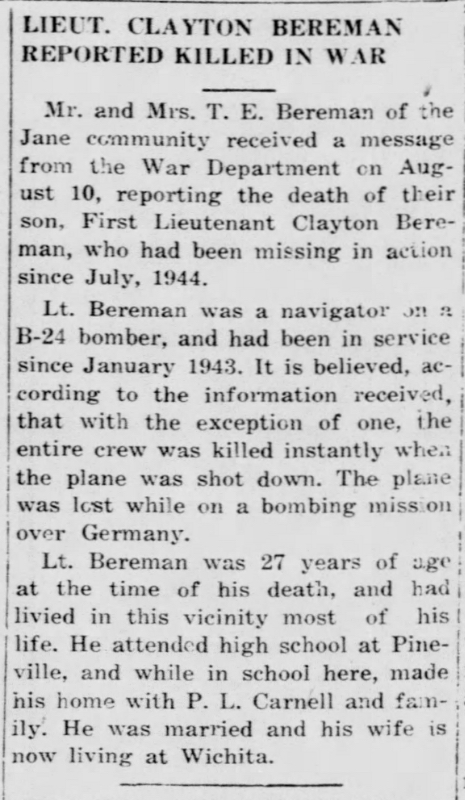 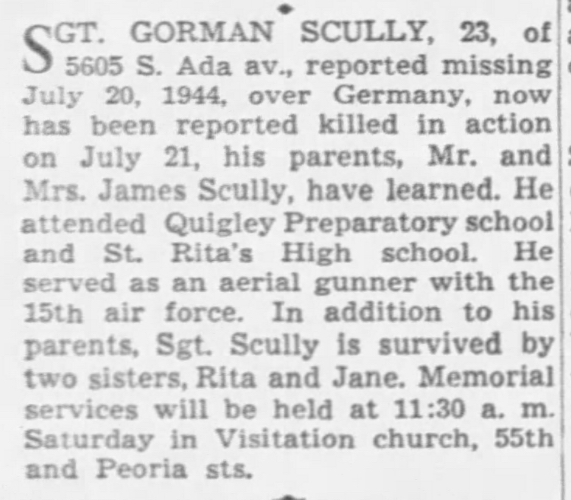 All site material (except as noted elsewhere) is owned or managed by Aircrew Remembered and should not be used without prior permission.
© 2012 - 2022 Aircrew Remembered Last Modified: 13 December 2021, 13:28
If you would like to comment on this page, please do so via our Helpdesk. Use the Submit a Ticket option to send your comments. After review, our Editors will publish your comment below with your first name, but not your email address.