Jack Hilton, a Typhoon fighter pilot in the Second World War, has died at the age of 99. The Airdrie, Alta., resident died on March 7 2019, according to the Royal Canadian Air Force.

Hilton was just 19 when he enlisted in the RCAF, first serving as a flight instructor in Canada and the U.S. before joining the front in Europe in 1943 to serve with 438 Squadron RCAF.

Hilton wrote a book detailing his experiences: The Saga of a Canadian Typhoon Fighter Pilot.

'It was a culture shock,' Hilton said of his wartime experience. 'I was a qualified pilot at 50 hours, if you can imagine.'

He said he definitely wasn't prepared for the realities of war.

'You were just learning,' he said.

His plane, the Hawker Typhoon, was a ground support aircraft that was plagued by design problems — but Typhoon pilots proved instrumental in turning the tide at several major battles in favour of the Allied forces.

'We lost pilot after pilot … you'd look over and your wingman was on fire, and all you could say was 'Jump Charlie, jump.' You got to the point where you didn't make friends, you made acquaintances.' 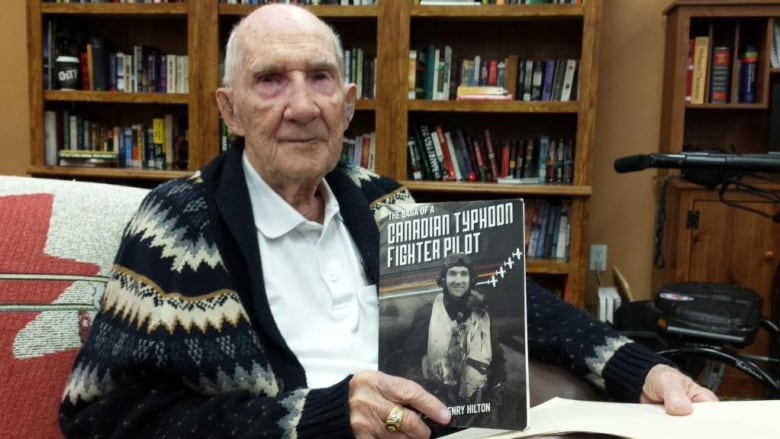 Hilton holding his book in 2016

He flew in more than 100 missions, but the most memorable might have been D-Day, the Allied invasion of France's Normandy region that saw 156,000 American, British and Canadian forces land on heavily-fortified beaches.

Hilton described the day as an 'organized confusion,' but said there was no time in that — or any — mission to be afraid.

'Once you're involved in combat, you don't worry about fear, because what good would it do you?'

Hilton described being shot down over Dunkirk in an interview with Historica Canada's Memory Project.

'We got over Dunkirk too low and the anti-aircraft shot out one of our twin engine airplanes … so we crash landed and we went to work the next day, flying airplanes,' Hilton said. 'Get shot down one day and you go fly the next.'

'When I was a little kid I asked him about being a hero, I was about 10 or so, and he said, 'Don't call me a hero, they're all buried in France,' Rick said. 'And I said, how does a man know he's brave or courageous? And he said 'It's simple. You do the right thing.'

The frightening part for Hilton was returning back home after the war.

'I come back after fighting the war, doing my share, and the government gave me a pin and $100 … I came back to nothing.' He was awarded the Legion d'Honneur (left)

Of the 28 men he was deployed with, just eight survived.

Hilton stayed in the military, and went on to become an early monitoring expert, monitoring Russian nuclear bombers, his son said.

In 2015, he spoke to a squadron in Cold Lake about his experiences.

Lt. Col. John Alexander was one of those in the mess hall for that address, and said there wasn't a dry eye in the house.

'It's pretty rowdy, even when the guest of honour is speaking, and listen the only time I've ever seen that where you could hear a pin drop. Everyone was glued on what this guy was saying … when he was finished it was a standing ovation and people were lining up to shake his hand,' Alexander said.

Alexander said the loss of another veteran is a sad reminder of how important it is to pass on their stories year-round, not just at Remembrance Day.

Hilton was predeceased by his wife, Ethel. The couple was married for more than 70 years.

wordpress besucherzähler
© 2012 - 2022 Aircrew Remembered - All site material (except as noted elsewhere) is owned or managed by Aircrew Remembered and should not be used without prior permission.
• Last Modified: 15 March 2019, 19:07 •