Took off from Bardney, Lincolnshire at 22:30 hrs part of a large raid of 473 RAF aircraft to attack Gelsenkirchen in the Ruhr. Weather was cloudy and no moon until about 03.00hrs.

Shot down at 02.09 hrs around 16.000 ft by Hptm. August Geiger (1), with the aircraft came down at IJsselmeer, 20 km East South East of Edam, Holland. Sgt. Sams had only reported to the squadron that afternoon from 1660 OTU and this was his first flight with them. 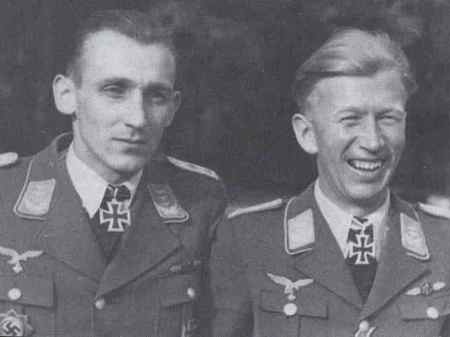 The German who claimed the kill was a night fighter ace who also on this same raid, shot down a Stirling from 218 squadron (EF430, HA-W - all the crew survived as PoWs) and a Halifax II, this one from 51 squadron (HR731, MH-C - all the crew killed).

(1) Hptm. August Geiger (49 kills) was later shot down by W/Cmr. Bob Braham from 141 Beaufighter squadron after a fierce dogfight on September 29th 1943. See Kracker Archive on this site.

Sgt. Walter Clive Rowlands. Amsterdam New Eastern Cemetery. Plot 69. Row B. Coll. grave 17. Son of John Wilfred and Emilia Rowlands, of Newtown, Montgomeryshire, Wales. Grave inscription reads: "He Gave All He Had To Give That Others Might Be Safe And Live".

At the going down of the sun, and in the morning we will remember them. - Laurence Binyon
All site material (except as noted elsewhere) is owned or managed by Aircrew Remembered and should not be used without prior permission.
© Aircrew Remembered 2012 - 2021 Last Modified: 14 July 2018, 08:30