In early June, Sgt. 'Joe' Josie volunteered to fly with another crew to replace a sick crewman and was permanently replaced by Fg Off Rowland W. Jones. On the day of the fateful mission Sgt.. Edward C. Green replaced Sgt. Walter Thorn. (Credit: Stephen H Garrity)

Taking off from RAF Croft in Yorkshire at 23:14 hrs. joining 320 aircraft raid on the Sterkrade synthetic-oil plant in Northern Germany. 162 Halifaxes, 147 Lancasters and 14 Mosquitoes left to find the target area covered by a thick cloud and the markers dropped by the pathfinders very quickly disappeared. The main bomber force could do very little but bomb the demising glow of the markers through the cloud.

RAF photographic reconnaissance and the German reports agree that the bombing was scattered, although some bombs did hit the oil plant. This had little effect on production. 21 Germans were killed on the ground and a further 6 foreign workers. 18 Houses were destroyed.

The loss to the allies was huge with a total of 21 bombers shot down by the German night fighters and another 10 by flak. This amounted to 159 aircrew being killed, 53 being made PoW. Flak batteries reported that a total of 14,244 rounds were fired at the bomber stream.

Original intelligence reports gave credit to Hptm. Günther Wagner of 7./NJG2 as the pilot that shot down the aircraft. However, post war research by Fg Off Garrity revealed that the aircraft was shot down by Haupt. Heinz Strüning with his navigator, Sergeant Apel.

(1) Fg Off. Richard Garrity evaded capture and returned to RAF Northolt on the 7th September 1944. After the war he returned to his home in Point Claire, Quebec, Canada. The following video retells the events leading up to the aircraft loss and his Escape & Evasion in his own words. (Credit: Stephen H Garrity)

A comprehensive account of Fg Off Garrity’s Escape and Evasion can be viewed here. ’Into their midst’ was created by Stephen H. Garrity, the son of Fg Off Garrity and pays tribute to his father’s remarkable story and that of the helpers (Resistance) who risked their lives in helping his safe return to England. (Credit: Stephen H Garrity)

Originally posted to 431 Squadron on the 18th September 1943 as a member of the Craig crew, with whom he flew 13 operations. Rowland joined the Johnson crew after their regular bomb aimer, Plt Off Gordon Beverley Jose J85356 RCAF was killed while serving as a mid under gunner with the Artyniuk crew during an operation to Versailles on June 7/8th - Halifax III MZ602 SE:U)

Sgt Green was commissioned and promoted to Plt Off with Service No. J90088 with effect 15th June 1944

Posthumously commissioned and promoted to Plt Off with Service No. J90421. 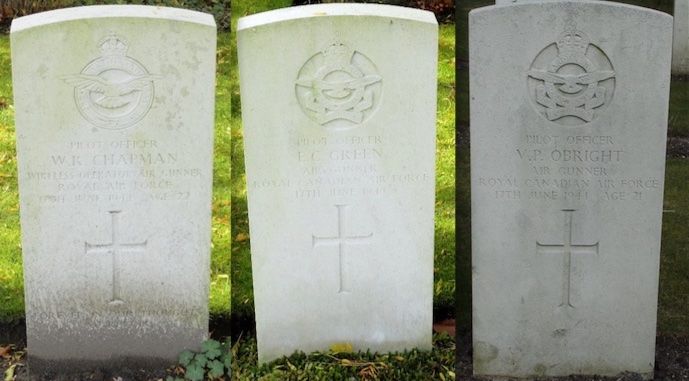 Researched for Aircrew Remembered by Linda Ibrom - June 2017 and dedicated to the relatives of this crew with thanks to Claire Jones, sister in law of Fg Off. Jones. Also our thanks to the Canadian Virtual War Memorial for photograph of Sgt. Obright. Page originally placed with Matt Lacroix running the great Bomber crew website - now updated with further information and operation details. Special thanks to Stephen H. Garrity for his kind permission for access to his research materials and web site. Thanks to John Jones for the reference to the Nachtjagd Combat Archive (Apr 2021). Other update to the narrative by Aircrew Remembered (Apr 2021).

RS 11.04.2021 - Note regarding Nachtjagd Combat Archive disparity and other updates

At the going down of the sun, and in the morning we will remember them. - Laurence Binyon
All site material (except as noted elsewhere) is owned or managed by Aircrew Remembered and should not be used without prior permission.
© Aircrew Remembered 2012 - 2022 Last Modified: 11 April 2021, 06:59