Due to the use for the first time of fighter flares dropped by German aircraft to mark the route of the bombers the German night-fighters made many attacks on the bomb run. This resulted in huge losses to the allies with 47 aircraft lost - 10 Lancasters, 17 Sterlings and 20 Halifaxes.

The raid was hampered by cloud and the very heavy defences around the German capital and the raid was considered as not very successful - 85 homes were destroyed, and only 1 industrial building was damaged. 66 civilians were killed and 2 German soldiers with another 109 injured - nearly 3,000 people were made homeless which resulted in Goebels ordering the evacuation of Berlin of all children and adults not engaged in war work to country areas.

The loss of allied crews on this raid amounted to: 237 Aircrew killed, 102 made PoW with 3 others evading capture. 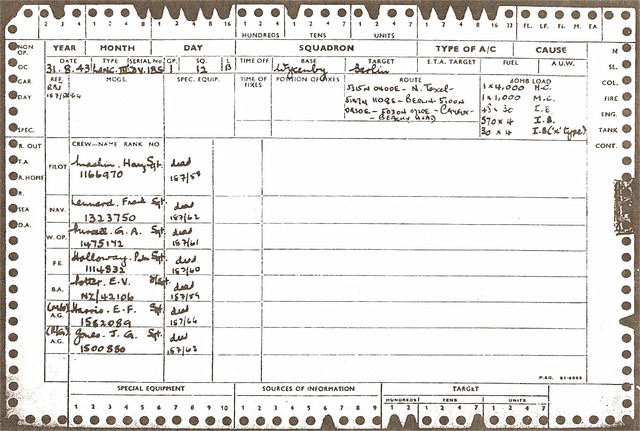 Initially buried at the Russian Cemetery in Zerbst - reinterred after the end of the war.

Sgt. George Albert Purcell. Berlin 1939-1945 War Cemetery 5.C.26. Son of George A. Purcell and Mabel Purcell, of Plumstead, London, England. Grave inscription reads: "Greater Love Hath No Man Than This, That He Lay Down His Life For His Friends".

Sgt. Edwin Fuller Harris. Berlin 1939-1945 War Cemetery 5.C.23. Son of Guy and Kate Harris, of Edgbaston, Birmingham, England. Grave inscription reads: "Jesus Said, "Lo, I Am With You Alway, Even Unto The End Of The World".

At the going down of the sun, and in the morning we will remember them. - Laurence Binyon
All site material (except as noted elsewhere) is owned or managed by Aircrew Remembered and should not be used without prior permission.
© Aircrew Remembered 2012 - 2022 Last Modified: 25 March 2021, 14:39