The niece of Leslie Phillips. who should have been on this flight, contacted us in July 2015 - she would very much like to make contact with any relatives of the crew.

The Allies’ war against the Italians was going very well. With extra pressure brought to bear by Bomber Command, it was hoped that Germany's ally would soon capitulate.

Turin was selected for an attack by 295 Lancasters.

The route took them well out into the Bay of Biscay and across Southern France thus avoiding heavily defended areas. Many crews reported heavy icing over France, and encountering thunder-clouds over the Alps.

These long haul trips to Italy were not considered easy by crews and to prove the point 13 Lancasters failed to return.

Among those missing were F/O. John Millar and crew from 49 Squadron. Perhaps the raid three nights earlier had been an omen... ED726 with the Millar crew had been blasted by flak over Gelsenkirchen. It had been repaired just in time for them to take part in the Turin trip, the crew's fateful 13th operation. 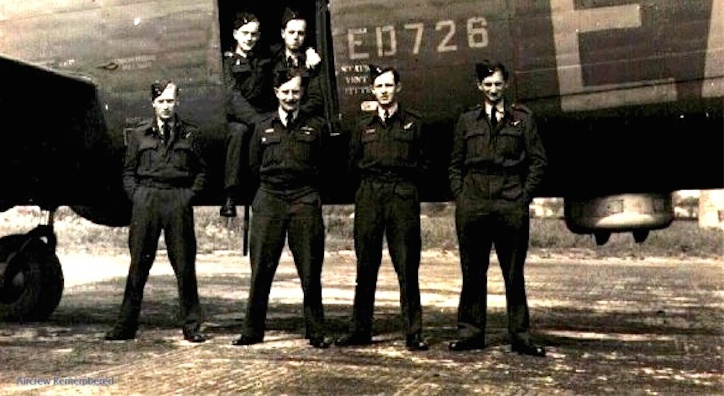 John Crabb and Leslie Phillips were grounded on the night of 12/13 July 1943 due to heavy colds, and as such missed the trip to Turin. Tragically their crew failed to return leaving them to find other crews in order to complete their tours. John navigated for Sgt. Edy’s crew and finished his tour of 30 ops in October 1943.

Leslie eventually settled as bomb aimer in Fl/Sgt. Ron Greig’s crew and was on his 28th op and near to finishing his tour when fate intervened…. he was sadly killed along with rest of the Fl/Sgt. Greig crew failing to return from Frankfurt on 22/23 March 1944 on Lancaster III ND536 EA-F.

Keen Lancaster buffs will have spotted the unarmed, un-painted ventral turret under V-Victor’s belly. The only information I have on this very unusual appendage is as follows; ED726 flew her first op with 49 Squadron on 23rd May 1943.... there are no records to show she had served with any other unit.

Victor was lost on her 16th operation and all but three ops had been with the Millar crew. As far as the crew’s navigator John Crabb recalls, ‘guns were never fitted’ and he has no recollection of any internal fittings that impeded progress along the fuselage. Why it was there remains a mystery. 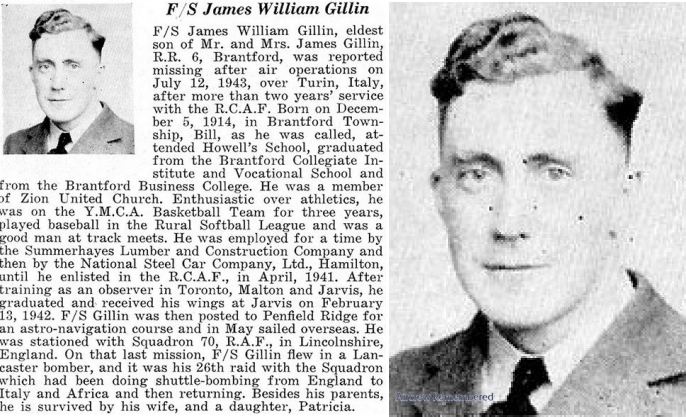 (1) Gillin Lake in Northern Ontario is named after W/O. Gillin.

Researched by Aircrew Remembered, researcher and RCAF specialist Colin Bamford for relatives of this crew. With thanks to The 49 Squadron Association, Album of Honour for Brant County World War II 1939 – 1945. Published in 1946 by The Brantford Kinsmen Club, Ontario, Canada and kindly reproduced with their permission. Also many thanks to Ann Firth (née Bettinson) who contacted us in December 2017.

At the going down of the sun, and in the morning we will remember them. - Laurence Binyon
All site material (except as noted elsewhere) is owned or managed by Aircrew Remembered and should not be used without prior permission.
© Aircrew Remembered 2012 - 2022 Last Modified: 08 December 2017, 19:34