August 2018 - It has been brought to our attention that someone is selling pieces from this aircraft on a well known auction website (and linking to this page) - we would like it to be known that we do not condone the selling of pieces from any aircraft crash site, whether crew members lost their lives or not. All pieces recovered from any crash site, even if they have been recovered with the appropriate MoD licence, belong to the Ministry of Defence.

However, if of course they have the necessary permissions and the appropriate licence, any profits are to be used to assist in any memorial to this or other crews and not for personal profit then we support this sale! We are sure that the relatives of this crew support our views.

Lancaster KB768 took off from RAF Middleton St. George at 17:50 hrs for an bombing operation to Soest. Lancaster KB768 collided in mid-air with 426 Squadron aircraft Halifax LW200. Both aircraft crashed to the ground at 19:00 hrs 1 mile East of Yelvertoft, near Rugby, Warwickshire and were destroyed by fire on the ground, and by the explosion of bombs. Both aircraft disintegrated and scattered over a large area.


Dec 5. Had a hard time getting DI’s [Daily Inspections] done as most of the W/Ops still in bed from last nights trip - but they were done. Ops came through about noon: target Soest. We received the bad news that Sgt. Virag is missing and all are sorry to hear this because he was one of the best types.

All seven crew from Halifax LW200 were identified, but only two crew from Lancaster KB768 could be identified with five being commemorated on the Runnymede Memorial. Both air gunners Flt.Sgt. Arie Gordon Baxter and Fg.Off. Everett Elwyn Cooper lying in Brookwood Military Cemetery

Map showing the area of the collision East of Yelvertoft, Near Rugby, Warwickshire between Lancaster KB768 and Halifax LW200 (Click here)

'....An umbrella of flares in the sky drew the eye of villagers for miles around Yelvertoft on Tuesday night. It opened out into a vast dome, reminiscent of the "mushroom" from rockets on pre war Bonfire Nights. Five or six seconds afterwards there was a crash, shaking doors in houses as far distant as Northampton, Wellingborough, Kettering and Market Harborough, and leaving a bright red glow in the sky, which rapidly sank to a sullen red reflection. Two planes, which has apparently collided in mid-air at a height of three miles, crashed to earth, and a bomb from one fell near the canal bank at Yelvertoft Wharf, making a huge crater, but failing to burst the bank. The first plane fell near the canal bridge and the other near Yelvertoft Convert

A house at the Wharf, called The Boat (formally an inn) occupied by two farmers, Mr J. Spencer and Mr J. Hakesley, with their housekeeper, Mrs Field, her daughter. Mrs Wells, and two young children, was stripped of windows, doors, slates and ceilings. Mrs Wells's husband, who is in the forces, had told her; "If you think there is going to be any trouble, grab the children and get out into the open air with them" The advice was followed, with the result that no casualties were suffered. Mrs Field grabbed one child, Mrs Wells another, and escaped before the first pieces of plaster fell in their ill-fated house. This is the third time planes have crashed near the The Boat. "Obviously the Lord takes care of us" said Mrs Field next morning

The body of one of the airmen was found a mile away from the wreckage. An example of the strange tricks played by blast is found in the fact that the house of Mr. W. Morris a well-known farmer, in the centre of the village, is undamaged, while houses across the street are minus glass in their windows. Several windows in the church were broken' 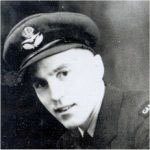 
Air Collision Commemoration. Saturday 6th December 2014. Yelvertoft History Group invited residents from the village and surrounding area to join them, to commemorate the 70th Anniversary of the collision and to remembere the sacrifice made. For further details click (here)

'The funeral of Flt.Sgt. Arie Gordon Baxter and Fg.Off. Everett Elwyn Cooper took place on the 12th December 1944 at Brookwood Cemetery. Full service honours were accorded with the coffins carried by RAF personnel. Three representatives from the Squadron were in attendance. A Firing party was present, and the coffins were covered by the Union Jack with wreaths from the Officers and Sergeants messes'

Fg.Off. John Reid. Runnymede Memorial, Surrey. Panel 248 Son of William and Margaret Reid of Montreal, Quebec John was born 11th May 1924 in Roche Percee, Saskatchewan. The family had moved to Montreal in 1929. Before enlisting John was employed by the Canadian Pacific Railway.

Baxter Lake, Saskatchewan was named after Arie in 1951.

At the going down of the sun, and in the morning we will remember them. - Laurence Binyon
All site material (except as noted elsewhere) is owned or managed by Aircrew Remembered and should not be used without prior permission.
© Aircrew Remembered 2012 - 2022 Last Modified: 29 March 2021, 17:01