Unit No: 40 Squadron (motto: Hostem acolo expellere - 'To drive the enemy from the sky')

Wellington DV504 was involved earlier in an accident on takeoff from Abu Sueir whilst with 70 squadron on the 21st July 1942, no fatalities and aircraft repaired. The pilot at that time was 21 year old. WO2. David Razell Roberts R80174 RCAF. He was killed on the 11th of January 1943 flying as a screened pilot with 81 Operational Training Unit on Whitley V LA766 - all the crew lost their lives. Robert Point on Nahill Lake was named after W/O. Roberts in 1987. (WO2. Roberts Shown left)

Taking off at 22:40 hrs with 7 others to bomb Tobruk. Some reports state that they were hit by flak. On the return trip, the port engine caught fire and seized. Flt Sgt. Spence ordered the crew to abandon the aircraft which they all successfully did.

Four of the crew rendezvoused at the crashed aircraft, Sgt. Linforth and Butteriss suffered injuries on their landing and were unable to try and escape. They gave Flt Sgt Spence and Sgt. Wood their emergency rations, including several tins of bully beef, sixteen packs of hardtack, some full water bottles, milk tablets, chocolates and toffees, they headed into the desert. The other 2 crew, Sgt. Hill and Sgt. Bowhill were captured by the Germans and made PoW. 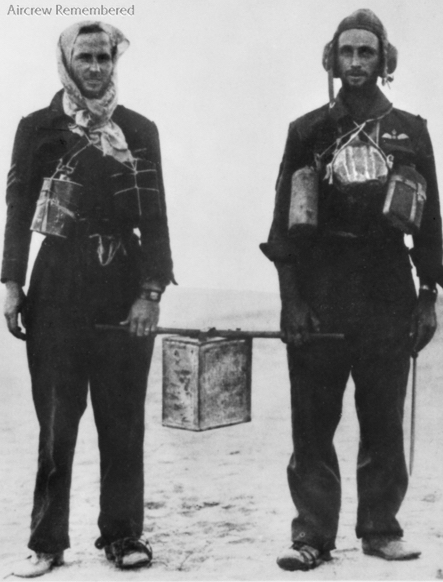 They decided to try and walk back to allied lines!

They covered 350 miles in 20 days surviving on water recovered from abandoned vehicles and occasionally met some Bedouins who gave them small amounts of water and food. By the end of the nineteenth day, their food rations ran out and they were down to only two full bottles of water between them.

Finally, on the 20th day of their amazing trek, on the 2nd of November, they were found by a British advanced armoury unit north of El Maghra who took the two of them to safety.

The Commanding Officer, Wg Cdr. Richard Edwin Ridgeway recalled events: The Army gave them a meal and drink, but they refused to wash, change or do anything till they had reached the Squadron. They were flown to the Squadron, where I had them placed into sick quarters, not because they were ill, but to give them the pleasure of a proper bed and bath. After a few days of “sick” treatment, I sent them on leave. They only wanted to go to Palestine, and as that was out of bounds, I gave them a “To whom it may concern” open letter, giving details of their epic walk, lent them my Squadron light communications aircraft, a Magister, and sent them to Palestine. Everywhere they landed they got the VIP treatment. 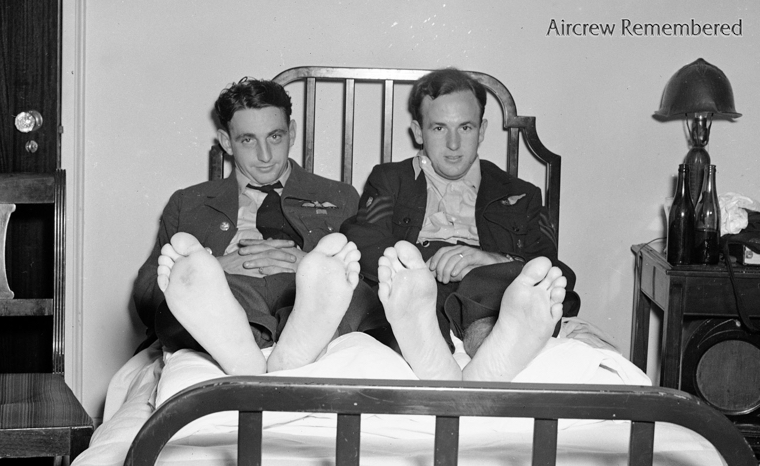 Above: 31st May 1943 Heroes visiting war factories in Canada under the auspices of the Munitions and supply Board, Plt Off. Bob Spence, DFM. left, of Highgate, Ontario and Flt Sgt. Johnny Woods of Sydney, Australia, (Courtesy Francois Dutil)

An RCAF press release dated 22nd May 1943 described his adventure as follows: After being given up for dead, and actually sleeping in a tomb. Plt Off Robert E. Spence, DFM of Highgate, Ontario is back in Canada with quite a reputation as a pedestrian. Plt Off Spence’s reputation began the night of October 8, 1942, when his Wellington bomber was shot up during a raid on Tobruk. The port engine was hit and it immediately packed up, hundreds of miles inside enemy territory. The Wimpy lost altitude rapidly, and it was decided to bale out. Four of the crew got together again on the ground, but the tail gunner had s shrapnel wound, and another member had a recurrence of an old ankle injury. On their suggestion, they were left behind near railway trucks where they would be picked up and taken care of, while Spence and his Australian air gunner, Sergeant Johnny Wood, would try to walk back to the British lines.

Above: 4th May 1943 Investiture by King George at Buckingham Palace, when the King invested Spence with the Distinguished Flying Medal Here they are seen in a happy mood with Mrs N.I. Butteriss, of London, England, their guest of the day, and mother of their wounded air gunner who is now a prisoner of war. (Courtesy Francois Dutil)

Wood now has come to Canada to train as a pilot. They had a few cans of bully beef, a can of tomato juice, emergency dinghy rations and escape kits. The Horlick’s tablets proved to be their salvation. They kept up their strength and didn’t make them thirsty. The pair had to take plenty of detours to avoid enemy patrols and several times were chased by German aircraft. When they came across wrecked tanks they were able to collect precious salvage - water from radiators and canned food from the debris. Walking was very rough, and their service boots began to give them a lot of trouble, so they made rubber insoles, salvaged from a wrecked bomber, which proved a big help and enabled them to maintain a pretty fast pace. By day they suffered from extreme heat.

At night the cold was bitter. Until they found two German blankets they had been using part of a parachute to wrap themselves in at night. Despite the fact that they were dead tired, they found it almost too cold to sleep. They got terribly thirsty at times, and one night when it poured rain they were able to collect water in the hollows of the lava rock. One day they stumbled across an Egyptian tomb and explored it in the hope of finding water. There was none. They cut weeds nearby, made mattresses and spent the night in the tomb.

Above: 25th May 1943 arrival of pilot officer Spence and flight sergeant Wood, at Thamesville, Ridgetown, Highgate. Wood is (jokingly) complaining about the gift of a case of tomato juice. unknown if related to the tomato juice they drank in the desert. (Courtesy Francois Dutil)

As they plodded through the Qattara Depression they were getting weary and almost exhausted, until they came across an Arab camp. They stayed with the Arabs for a few days to regain their strength and found the camel’s milk and the rice queer tasting stuff. Anxious to rejoin their squadron, the two airmen were soon on their way again. Their weight was dropping steadily as they struggled on, and the closing stages were cruel. It was a great moment in their lives when they sighted a British patrol some distance south of El Alamein. The pair, looking like a couple of scarecrows, was placed in a hospital for a few days, where they fully recovered and learned that they had been given up for dead. They went off to Palestine for a rest, and within two weeks had regained most of their lost weight.

Plt Off Spence is happy to be back in England again but would have liked to stay for the Tunisian campaign. Today it would take a lot of argument to entice him into anything which resembles a long stroll.

Notes: Accident at No.22 OTU, 25th January 1942, Wellington Ic, R1773. “Pilot states that after four hours flying, port engine oil pressure dropped to zero pounds per square inch and temperature to 25 degrees C. The second pilot was sent immediately to pump oil from the reserve tank into the port engine, but engine stopped and the aircrew and reduction gear fell off. Aircraft was force landed on the runway at Hinton-in-the-Hedge with the undercarriage lowered by not locked.”

The Technical Report read, “The reduction gear of the port engine flew off in the air owing to the oil tank having run dry. The excessive consumption which most certainly did occur was undoubtedly aggravated by the fact that although the flight lasted four hours, no fresh oil had been drawn from the local tank.” General Remarks read, “Although this forced landing was primarily caused by a failure in crew drill and captaincy, the subsequent calm behaviour of the two pilots and the captain’s good judgement led to a successful forced-landing in difficult circumstances. Every effort was made in the time available to lower and lock the undercarriage by the emergency system.” 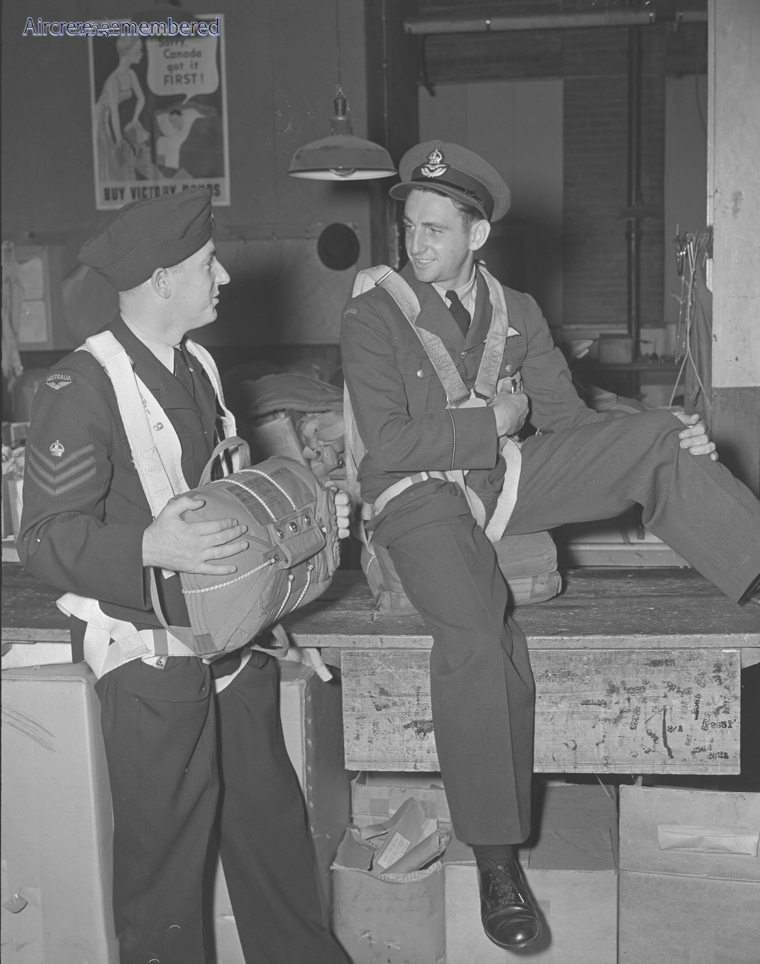 Above: During their visit to the Irvin Air Chute at Fort Erie, Ont. Flt Sgt. Johnny Wood left and Plt Off. Bob Spence right tried on the type of parachute used by them in their operational flights. (Courtesy Francois Dutil)

On 23rd September 1943, while at No.36 OTU, he was reportedly having an anxiety state caused by a stressful overseas tour, insufficient rest and extended lecturing in Canada. This was further demonstrated by a letter dated 5th November 1943 (A.G.A. Spence, Ottawa Division, National War Finance Committee, to G/C D.E. McKell, Director of Personnel, AFHQ, expressing appreciation for his work with the Fifth Victory Loan campaign.

It read in part, “I know that Bob has not been keen on public appearances but on the other hand he has at all times been extremely courteous in acceding to requests to speak at meetings. He has spoken at all hours of the day and night, from 7.30 a.m. one day until midnight another. He has at all times carried himself in such a manner as to be a very definite credit to the RCAF. We appreciate very greatly your courtesy in allowing him to help us, and hope that his experiences have not been too painful for him.”

None - all survived the war.

Robert Leslie Spence. Born on the 11th of October 1918 in Chatham, Ontario. The son of Stewart Spence the Indian agent in Highgate, Orford, Canada. Attended Ridgetown High School from 1932 to 1937. Worked as a farmer prior to service. Enlisted on the 08th October 1940. Robert went overseas on the 23rd February 1942. arriving in Egypt in February of 1942. Awarded DFM and promoted to Plt Off. Also awarded the 'Order of the Flying Boot'.

John Kevin Wood was awarded the 'Order of the Flying Boot'. Born on the 15th January 192.1. Enlisted 01st February 1941. Worked as a porter prior to service. Of 131 Pacific Highway Hornsby, New South Wales, Australia.

Researched by Kelvin Youngs (Webmaster) and dedicated to the relatives of this crew with thanks to Francois Dutil for details and many photographs, National Archives Australia. (Mar 2022). Thanks to Dawn Martens, the daughter of Dawn Cline, for the correction to the family photograph (Jul 2022).

Other sources as quoted below:

At the going down of the sun, and in the morning we will remember them. - Laurence Binyon
All site material (except as noted elsewhere) is owned or managed by Aircrew Remembered and should not be used without prior permission.
© Aircrew Remembered 2012 - 2022 Last Modified: 06 July 2022, 14:29