Lancaster LM675 took off from RAF Waddington at 08:15 hours on 17th September 1944 to bomb enemy strong points at the channel port of Boulogne, France. LM675 bombed the target and almost immediately was hit by flak which seriously damaged the aircraft.

This attack was part of Operation Wellhit by mostly Canadian groundforces. The bombing was directed at 5 zones and was against the German ground defences called Landfront. (Information supplied by Ben Muller - January 2016) 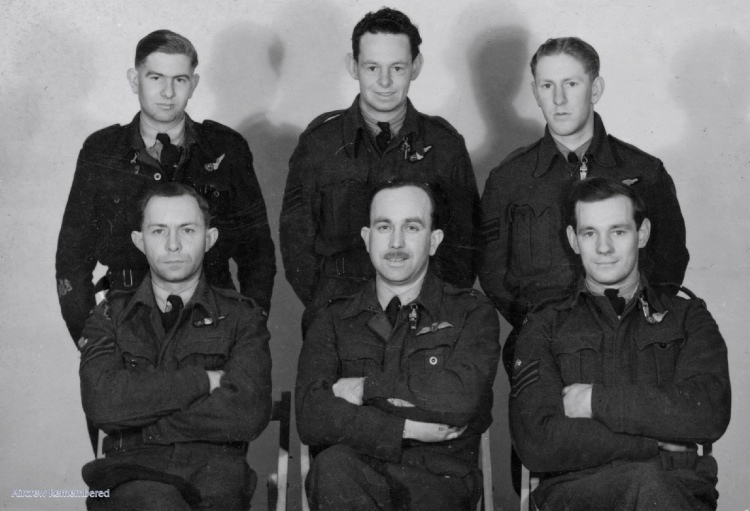 Above LM675 shortly after crash-landing, creating quite an interest with the locals. 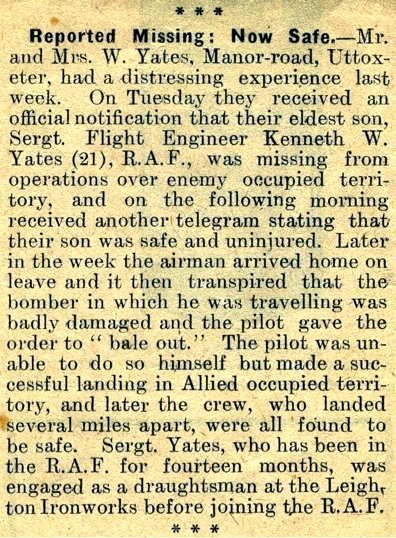 
Six of the crew baled out over friendly territory. The pilot managed to crash land the aircraft with wheels and flaps down in a field south east of Samer ending up among trees. The pilot escaped injuries and there were no fatalities 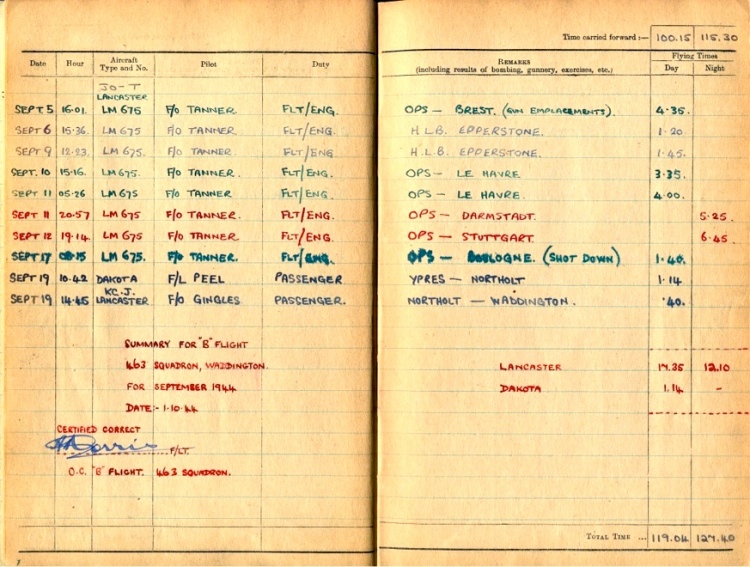 Final Log Book entry page for Sgt. Yates - showing the loss and also transport back to his base. (courtesy Leah Kernot)

Squadron ORB describe from the pilot report what happened:

I ordered abandon aircraft and moderate control of aircraft maintained at 4000ft. WOP, Mid Upper and Rear Gunner tried to get out of rear door This was jammed the handle broke off and they had to come to front hatch. 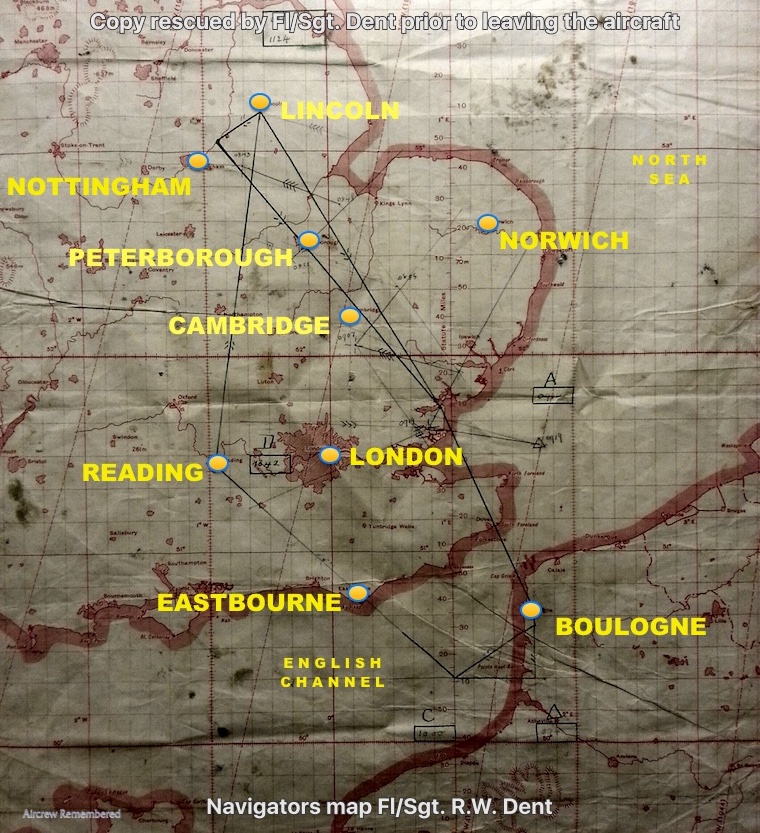 At 1,500ft I attempted bale out – unsuccessfully as aircraft dived out of control. Re-gained control at 800 feet and having no other alternative had to make forced landing in quickest possible time. Landing effected in a field that was obstructed with anti-invasion posts, with starboard engine on fire. Undercarriage and flaps were serviceable and operated allowing me to make a successful landing.

At end of landing run, to avoid further danger, I swung aircraft to port coming to rest in a wood. Made very quick getaway as starboard outer wing and engine on fire.

Throughout these extremely difficult circumstances, my crew behaved in an exemplary manner, and showed calm and coolness throughout.'

The Navigator reported 'Our pilot’s captaincy and leadership displayed throughout these intense moments gave us confidence and inspiration. We considered the aircraft impossible to fly, and how he effected a landing was, in the opinion of all of us a miracle, and we never expected after we left that the aircraft would be landed.'

(1) 20 year old, Fl/Sgt. William John Lemin AUS/427203 was later killed on the 02nd November 1944. With 467 Squadron Lancaster I DV396 PO-B on an operation to Dusseldorf. The pilot, F/O. Leslie Keith Landridge AUS/429972 was also killed, the remaining 5 crew were safe after coming down in allied territory within Belgium.

None - all crew survived.

Researched and dedicated to the relatives of this crew with thanks to Leah Kernot (daughter of the Air Bomber Fl/Sgt. Hundy) for information. ORBs for 463 Squadron. Australian War Memorial report No. 342. Ben Muller for operation details. With thanks to Mr. G.B. Dent who contacted us in November 2016 sending us a copy of the navigators map. 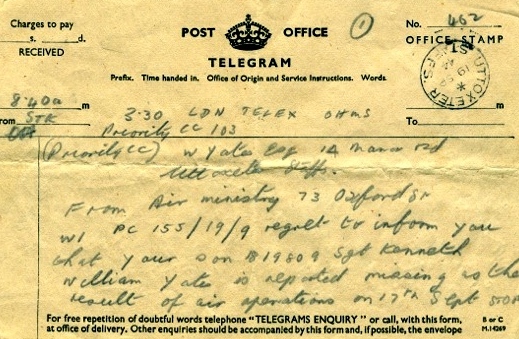 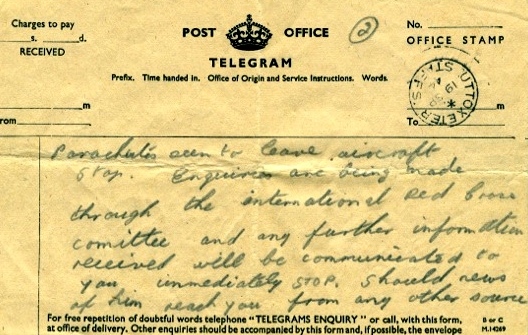 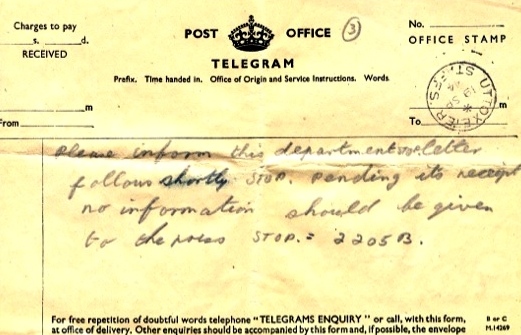 Series of telegrams received by the family of Sgt. Yates, imagine the feeling when each of these was delivered?

At the going down of the sun, and in the morning we will remember them. - Laurence Binyon
All site material (except as noted elsewhere) is owned or managed by Aircrew Remembered and should not be used without prior permission.
© Aircrew Remembered 2012 - 2021 Last Modified: 26 March 2021, 17:20