N3290 was one of six Spitfires that were claimed shot down by German pilots from 6./ZG 76. Three pilots from this heavy fighter (Bf 110) Geschwader (Wing) each claimed two Spitfires. Fw, Werner Hahn, Uffz Karl Huber and Fw Karl Langenberg

Sgt. Paul Henry Klipsch, 566547 RAF was killed and laid to rest at the Wierre-Effroy Churchyard


Sqn.Ldr. Bushell was later executed in March 1944 by the Gestapo on the orders of Hitler after being recaptured in the aftermath of the "Great Escape" from Stalag Luft 3. John Gillies remained a PoW until the end of the War 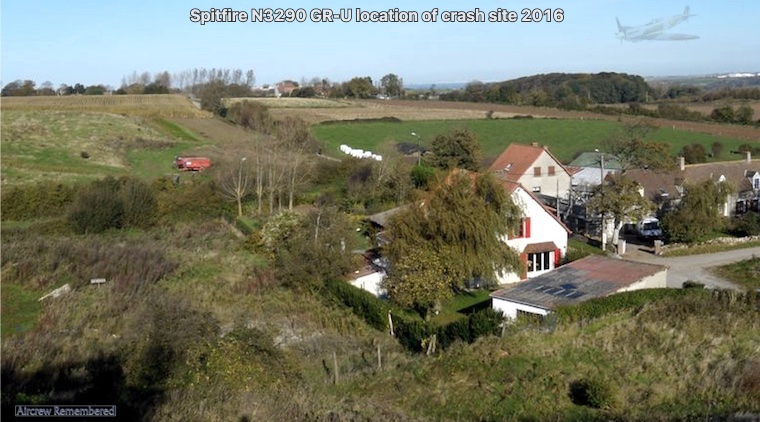 Note: John Arthur Gillies (Born on the 18th August 1912 in Marylebone, Middlesex) was the eldest son of Sir Harold Gillies (17th June 1882 - 10th September 1960) a New Zealand-born, Cambridge-educated ear nose and throat surgeon, widely considered to be the father of plastic surgery, which he pioneered during the First World War at the Cambridge Military Hospital, Aldershot and the Queen’s Hospital, Sidcup. His younger cousin Sir Archibald McIndoe (1900–1960), also New Zealand-born, and for many years Gillies’ junior partner, made his name during the Second World War treating aircrew who suffered serious burns at the Queen Victoria Hospital, East Grinstead – home of the legendary Guinea Pig Club. He was also a champion golfer, for many years lived at 71 Frognal, Hampstead, where a ‘blue plaque’ has been placed. His youngest son, Michael Thomas Gillies (15th September 1920 - 10th December 1999) followed his father in medicine (entomologist) - became the world authority on the Mayfly and the role of the Mosquito in the transfer of Malaria.

John Arthur Gillies was granted a commission as a Plt.Off. on probation in the RAF Reserves Class AA(i) (Direct entrant Officers with some previous flying experience), gazetted 29th March 1932.
His promotion to Plt.Off was confirmed on the 14th March 1933, and he was transferred to the Reserve for Air Force Officers (RAFO), gazetted 28th March 1933.
Promoted to Fg.Off. and transferred to the Royal Auxiliary Air Force (RAuxAF), gazetted 4th July 1939.
Promoted to Flt.Lt. whilst as a PoW on 3rd September 1940, gazetted 14th March 1941.
After returning to England he was awarded the MBE(M), gazetted 25th December 1945. Omnibus citation reads: "The KING has been graciously pleased to give orders for the following appointments to the Most Excellent Order of the British Empire for distinguished service while prisoners of war."

Reconstructing Faces-The art of wartime surgery: Professor Murray Clyde Meikle has since published a book on the evolution of plastic and maxillofacial surgery in the first half of the 20th century. This book is about four of the key figures involved. Sir Harold Gillies and Sir Archibald McIndoe were born in Dunedin, McIndoe and Rainsford Mowlem studied medicine at the University of Otago Medical School, and Henry Pickerill was foundation Dean of the University of Otago Dental School. The author describes how these surgeons revolutionised plastic surgery and the treatment of facial trauma, working on soldiers, fighter pilots and civilians disfigured by bombs, shrapnel and burns. Eventually Gillies et al. were supported by a vast surgical enterprise that included surgeons, dentists, anaesthetists, artists and photographers, nurses and orderlies. The text is fully illustrated with photos, drawings and case notes by the surgeons and war artists at military hospitals at Boulogne-sur-Mer, Aldershot and Sidcup in WWI and civilian hospitals at East Grinstead, Basingstoke and Hill End in WWII. The book includes a DVD of Rainsford Mowlem performing a variety of plastic operations. This book is a must for anyone interested in the history of medicine and the treatment of casualties in World Wars I and II.

Available from Amazon - ISBN: 978-1877578397 In hardback with a packed 264 pages. Aircrew Remembered are acknowledged in the publication.

At the going down of the sun, and in the morning we will remember them. - Laurence Binyon
All site material (except as noted elsewhere) is owned or managed by Aircrew Remembered and should not be used without prior permission.
© Aircrew Remembered 2012 - 2021 Last Modified: 11 March 2021, 12:06