Grayston and his young Australian pilot, Les Knight, had teamed up to fly Manchester bombers with No 50 Squadron, and remained together when they joined No 617 Squadron in March 1943. The flight engineer, who managed the Lancaster’s engines and systems, was seated alongside the pilot, and their teamwork was crucial to the successful operation of the heavy bomber.

After a few weeks’ concentrated training at very low level (on one occasion Knight flew under high tension cables near King’s Lynn), Operation Chastise was ordered for the night of May 16/17 1943.

The primary aim was to breach the Mohne Dam, with those aircraft not required for that target heading eastwards to attack the Eder Dam. Knight and his crew took off from Scampton with the main force, but before they were due to drop their “Upkeep” bouncing bomb, the Mohne was breached. Led by Guy Gibson, the three Lancasters that still had their bombs headed for the Eder.

This dam was surrounded by steep hills and presented a more difficult target than the Mohne. Settling at the required height of 60ft proved very difficult, and the first two aircraft made numerous attempts before dropping their bombs. One was accurate, but failed to breach the dam; the second exploded on the dam’s parapet.

This left Knight with the only remaining bomb. After two failed attempts, his third run was good and the weapon was dropped accurately. With Grayston applying full power, Knight hauled the Lancaster over the surrounding hills, allowing the rear gunner to have a perfect view as the bomb exploded and the dam wall crumbled.

Knight, who was awarded a DSO, and his crew arrived back at Scampton as dawn was breaking to find that eight of the 19 aircraft had failed to return.

Raymond Ernest Grayston was born on October 13 1918 at Dunsfold, Surrey. He was an automobile engineer when he volunteered for the RAF in February 1940. Initially he trained as an aircraft engineer, but in August 1942 he volunteered for the new aircrew trade of flight engineer. With a few hours’ flying time, he joined No 50 Squadron and teamed up with Knight.

On the night of September 15/16 1943, eight crews of No 617 were sent to attack an embanked stretch of the Dortmund-Ems canal near Munster. The leader was shot down en route and the remainder encountered fog in the target area.

While searching for the canal, Knight’s aircraft hit trees on a ridge, damaging the two port engines and tail unit. The 12,000lb bomb was jettisoned, and Knight and Grayston managed to coax the aircraft to 1,400ft to allow the crew to bail out. 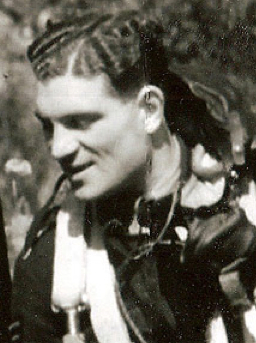 With two dead engines and limited control, Knight had little chance of escaping. Grayston was the last to leave the aircraft, saying a final farewell to his captain. Knight attempted to crash-land, but was killed when the Lancaster exploded as it hit a bank. Only three Lancasters returned from the raid.

Grayston landed uninjured but was captured almost immediately. He was sent to Stalag Luft III, remaining there until January 1945 when the PoWs were forced to march westwards on what became known as the Long March. He reached Stalag IVA at Luckenwalde where, after three months, he was liberated and flown back to England.

After leaving the RAF he joined Hawker Siddeley at Dunsfold and worked on the Hunter, Harrier and Hawk aircraft as a quality inspector. He retired in 1984 as chief inspector at British Aerospace (Military Division), based at Kingston.

Grayston was always amazed at the “fuss” made about the Dams’ raid, especially the difficulties encountered at the Eder Dam. In 2003, during filming for a television programme, he was able to fly in a restored Lancaster. The low-level flight was some 300ft higher than the Dams attack – and in daylight. For the first time in his life he exclaimed that he had “no idea how we did it”, going on to say: “It was an adventure… we had a job to do and that was all there was to it.”

A keen and successful amateur sportsman all his life, he played football and cricket – but golf was his greatest passion.

Ray Grayston, who died on April 15, is survived by his wife, Sylvia, and their son.

Add us to your address book. Click here
© 2012 - 2023 Aircrew Remembered - All site material (except as noted elsewhere) is owned or managed by Aircrew Remembered and should not be used without prior permission.
• Last Modified: 02 July 2019, 12:58 •