During the patrol the leader of 302 Squadron saw a large formation of Me109s approaching from about 5,000 ft above to the south. These passed over the top of the squadron. 615 squadron noticed them turn in a circle and saw two of them dive down to attack 302 squadron at a very high speed - they gave warnings and both squadrons took evasive action.

Nobody from 302 squadron realised that anyone had been hit until landing at Northolt. It turned out that Sgt. Kosarz had been shot down by an Me109 and the aircraft crashed at Pennybridge Farm, Mayfield Xavierian College in Sussex.

It seems that he did bail out of his aircraft but was killed as his parachute caught fire.

He had joined No.5 Operational Training Unit on the 2nd September 1940 to convert to Hurricanes before joining 302 Squadron on the 26th September 1940. 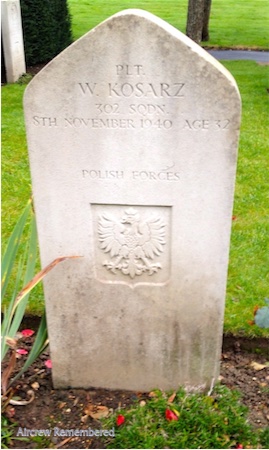 Sgt. Wilhelm Kosarz (Vilém Košař). Northwood Cemetery - Middlesex, Service Section H Grave 274. Born 20th June 1908, Karviná, Czechoslovakia. He had lived in Poland since 1926. In 1939, he joined the Czechoslovak Legion, fighting on the Polish side against Germans, and became a member of the famous Czech Quartet of 4 pilots (Košař, Balejka, František, Pavlovič). Only Balejka survived the war. (thanks to Jiri for this further detailed information).

Researched for relatives and friends of the pilot. With thanks to Robert Gretzyngier, Woitek Matusiak, Wadldemar Wojcik and Josef Zielinski for Polish information that we may have used.

At the going down of the sun, and in the morning we will remember them. - Laurence Binyon
All site material (except as noted elsewhere) is owned or managed by Aircrew Remembered and should not be used without prior permission.
© Aircrew Remembered 2012 - 2021 Last Modified: 11 October 2015, 20:40