Taking off at12.33 hrs on a risky daylight bombing operation to Milan with 87 others from 5 Group.

The force moved independently direct over France using partial cloud cover to a rendezvous at Lake Annecy in France prior to crossing the Alps.

The operation took the city totally by surprise with the warning sirens not sounding until the first of 135 tons of bombs exploded on the city. Light flak was encountered and Italian fighters were weak.

The bombing continued for 18 minutes which destroyed or damaged 441 houses, including the University, the prison, offices of the local fascist party, 2 churches, 2 schools and 2 hospitals. RAF reconnaissance later reported that the Caproni aircraft factory had been hit as well as a umber of commercial and industrial buildings. At least 171 people on the ground were killed.

The allies lost 3 Lancasters, with one other crashing near Ford, Sussex on return. Details:

Lancaster W4251 was hit by 37mm flak by 1012 Battery Dicat Unit with the aircraft crashing at Segrate near Milan, Italy. 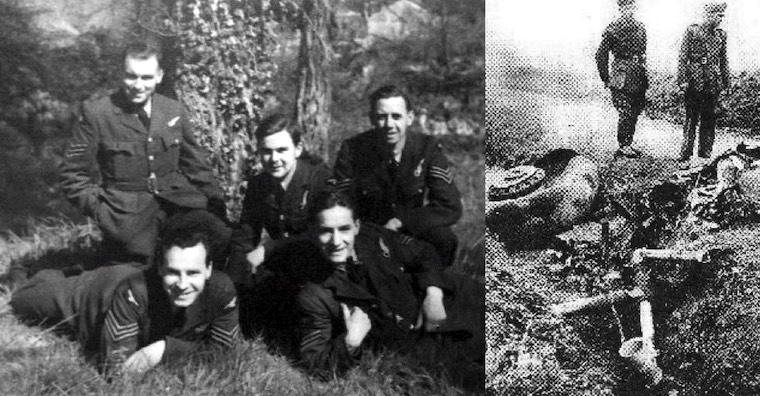 Above left: some of the crew, as yet unidentified. Right: Crash site (courtesy Buckley at War - see credits)

(1) On the15th July 1949 Missing Research and Enquiry Unit listed the crew as having no known graves. Buried in Segrate Communal Cemetery marked as unknown. All their names inscribed on the Runnymede Memorial. However in 1952 the bodies of the crew were identified and moved to the Ravenna War Cemetery.

F/O. John Thomas Norie Miles. Ravenna War Cemetery Collective grave IV. F. 2-4. Son of Lieut. John Miles, R.N and of Frances Lottie Miles, of Hayling Island, Hampshire, England. John attended Portsmouth Grammar School 1933-1938. His brother 19 year old, David William Norie Miles an apprentice serving in the Merchant Navy also died in service on the 16th January 1941. He was on the S.S. Oropesa (Liverpool) when it was attacked and sunk by U-96 commanded by Heinrich Lehmann-Willenbrock (shown right - see credits) after being hit in the stern by a torpedo south east of Rockall in the North Sea. 106 crew died with 143 survivors picked up.

Sgr. Gilbert Gordon Fraser. Ravenna War Cemetery Collective grave IV. F. 2-4. Born on the 08th March 1910 in Aberdeen, Scotland. Worked as a motor mechanic prior to service. Enlisted in the RAAF on the 04th March 1940 in Sydney. Embarked for England on the 13th June 1941 - arrived 31st August 1941. Son of Edward and Jessie Fraser and husband of Annie Isabella Geddes Fraser who he had married on the 26th April 1930 (nee MacFarlane, later Hodgekiss, died 26th July 1961, age 51), of 2 Jupiter Street,Gladesville, New South Wales, Australia.

Researched and dedicated to the relatives of this pilot with thanks to Portsmouth Grammar School, David Vickers at Buckley at War, UBoat Net, other sources as quoted below:

At the going down of the sun, and in the morning we will remember them. - Laurence Binyon
All site material (except as noted elsewhere) is owned or managed by Aircrew Remembered and should not be used without prior permission.
© Aircrew Remembered 2012 - 2023 Last Modified: 30 June 2021, 19:21