(2) Poirier Lake in the District of Kenora, Ontario is named after F/L Poirier.

(6) Wood Lake in Saskatchewan is named after Sgt. Wood

Note: The geographical name Memorial Mountain was established at the request of the Armstrong branch of the Royal Canadian Legion, the Town of Armstrong and the District of Spallumcheen, to remember all the young men from this semi-rural farming district at the north end of the Okanagan Valley who died on active service in World War II. The dedication has since been extended to recognize all the World War I fatalities from the district. The mountain overlooks the community, and is visible from the Armstrong Cenotaph in the town’s Memorial Park.

After being grounded for most of the day by bad weather the aircraft took of from Gander at 22:16 hours intending to land at Mont Joli, Quebec on the banks of the St. Lawrence River. At 01:45 the crew requested permission to land at Mont Joli but were denied as the runways were closed due to the poor weather and told to proceed to Rockcliffe in Ontario or Dorval, Quebec. Besides a call for help heard by another aircraft flying near Grand-Mere some 250 miles west of Mont Joli nothing further was heard from the aircraft.

Upon being reported overdue and missing the RCAF launched a massive air search along the planned flight path but despite over 700 sorties between 20 October and 26 November no trace of the aircraft was found. Even though villagers in St. Donat reported hearing an aircraft and the sound of a crash that night, it was dismissed by the military authorities who had already concluded that the Liberator was lying somewhere on the bottom of the St. Lawrence River.

And so it remained a mystery until almost three years had passed, when, on 26 June 1946 during an aerial search for another lost aircraft, wreckage was spotted near the top of Montagne Noire. That same day a search party blazed a trail up through the rugged terrain and discovered the burnt out wreckage and the bodies of the 24 airmen.

In part due to the harsh and remote mountainside and the fact that only three of the bodies could be positively identified, it was decided to inter the remains at the crash site. There they remained until 1985 when they were re-intered by the Commonwealth War Graves Commission at the cemetery in the village of St. Donat.

Further details: Sanderson enlisted in October, 1940 and upon graduating from No.1 ITS, Toronto was sent to No.3 Elementary Flying Training School in his hometown of London, Ontario. After graduation he was assigned to No.6 Service Flying Training School at Dunnville, Ontario following which he spent eleven weeks at Central Flying School, Trenton, becoming an instructor on 9 August 1941 at No. 14 SFTS, Aylmer, Ontario. It was here that he was awarded the Air Force Medal for an incident that occurred during a training flight in October of that year. His citation reads:

Sergeant Pilot Sanderson displayed exceptional devotion to duty on 17 October 1941 when, on discovering his aircraft to be on fire, first of all ensured the safety of his pupil by ordering him to jump from the burning aircraft, the pupil making a successful parachute landing. The pupil being safe, Sergeant Pilot Sanderson prepared to abandon the aircraft, but seeing that the fire was diminishing, stayed with the aircraft and proceeded to carry out a successful forced landing. His actions at all times during this emergency were extremely commendable. This NCO has carried out some 400 hours of instructional flying. This, together with the initiative and presence of mind displayed on the above occasion, constitute a most valuable contribution to the success of flying training at this unit.

A summary of the accident report involving Harvard 3068 stated "On recovery from spin engine took fire. Pupil abandoned aircraft on order of pilot who subsequently got fire under control and landed wheels up." The incident was blamed on carburettor icing and a stuck throttle. The pupil was F/O. Leroy Means Sullivan of Chattanooga, Tennessee who was killed in a flying accident at Martlesham Heath, England while piloting Typhoon JP728 of RAF No. 56 Squadron, 7 November 1943.

In November 1942 Sanderson was posted to Eastern Air Command.

Further details: Enlisted in Toronto in 1941 where he worked as a Fitter.

This warrant officer has completed hundred of hours of operational flying on anti-submarine patrols. On one occasion during an attack against a heavily armed enemy submarine his coolness and efficiency in operating his radio, thus obtaining the assistance of another aircraft, were of outstanding assistance in repelling the U-boat attack on a convoy.

Further details: Enlisted in Moncton, N.B. 20 August 1940. Trained as a wireless operator at No.1 Wireless School, Montreal and then at No.3 Bombing and Gunnery School, McDonald, Manitoba graduating in June of 1941.

Warrant Officer MacDonald by his great skill and perseverance has established a reputation as an outstanding Wireless Operator. His operational record is extensive and he has at all times displayed keenness, devotion to duty and willingness to work under any and all conditions.

Further details: After enlisting in October 1940, Fisher graduated from No.1 ITS Toronto the following January. After completing Elementary Flying Training at St. Catherines, Ontario in March he was posted to No.9 Service Flying Training School at Ottawa where he gained his wings in June 1941. At the time of his death he had flown 1218 hours, 303 of which had been on operations for a total of 35 sorties. He is credited as the pilot of a Liberator that sank U-341 one month prior to the crash that took his life.

His brother, F/O William John Fisher was killed just two weeks prior while serving with RAF 354 Sqdn. at Cuttack, India.

Further details: Enlisted in London, Ontario October 1940 completing training at No.1 ITS Toronto. After being found unsuited for pilot training he was posted to No.2 Bombing and Gunnery School, Mossbank, Saskatchewan and No.3 Wireless School at Winnipeg, Manitoba. At the time of his loss he had completed 115 sorties and accumulated 1092 flying hours, 853 being on operations.

This wireless operator/air gunner, since listed as missing, was wireless operator on a VLR Liberator which attacked an enemy submarine, later assessed as probably sunk. He efficiently carried out his duties throughout this action, despite severe weather conditions and extreme range. He has had a splendid record throughout a long period of operational flying.

Further details: Born in Foleshill, Warwickshire James emigrated to Canada with his parents and brothers and sister in 1927. After enlisting at Vancouver in March 1941, he trained at No.2 Wireless School Calgary, Alberta and No.5 Bombing and Gunnery School Dafoe, Saskatchewan. At the time of his death he had completed 756 operational hours.

This warrant officer was a wireless operator/air gunner on a VLR Liberator which engaged an enemy submarine while patrolling in the North Atlantic area. Throughout the attack this warrant officer, disregarding personal danger, obtained photographs of the action and the results of his excellent work made a complete analysis of the engagement.

Further details: His brother Sgt. Kenneth Lloyd Radcliffe was killed while serving with RAF 44 Sqdn. during a raid on Berlin in 1944. (See Lancaster ME672).

Further details: Enlisted 3 September 1942. After dropping out of high school Charles worked as an auto mechanic for his father. Served with the Lorne Scots Militia from 1940 to 1942. Active in ice hockey, swimming and rugby while in school and an adherent of the United Church of Canada along with his parents and brother James Robert and sister Guidry Elaine Dynes. 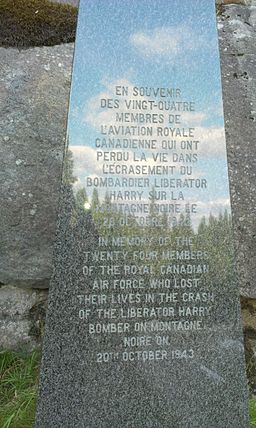 Researched and written by Colin Bamford for Aircrew Remembered and dedicated to the families of all those lost aboard Liberator H for Harry.

Francois Dutil for photograph of pilot

At the going down of the sun, and in the morning we will remember them. - Laurence Binyon
All site material (except as noted elsewhere) is owned or managed by Aircrew Remembered and should not be used without prior permission.
© Aircrew Remembered 2012 - 2023 Last Modified: 22 March 2021, 11:53