When the aircraft arrived in the vicinity of Manston, it apparently entered into an unauthorised mock 'dog fight' with two or three Hurricane aircraft. At the commencement of the fight the Havoc aircraft was flying at approx. 1500 ft but lost height during the action.

According to eyewitness accounts, the last manoeuvre the Havoc made was to dive from about 1000 ft to 400 or 500 ft when it pulled up to about 900 ft where a steep turn was attempted apparently without sufficient speed. The a/c commenced an incipient spin and although the pilot attempted to gain speed was unable to pull out of the ensuing dive. The entire crew lost their lives as the result of the accident.

'This officer has completed forty-four operational flights by night, and four sorties to Northern France. One night in January, 1941, he displayed great courage in attacking an enemy aircraft over the aerodrome at Poix, continuing his attack down to 500 feet, although aware of the heavy anti-aircraft defences at this aerodrome. He has displayed great coolness and zeal in the performance of difficult and dangerous duties.' 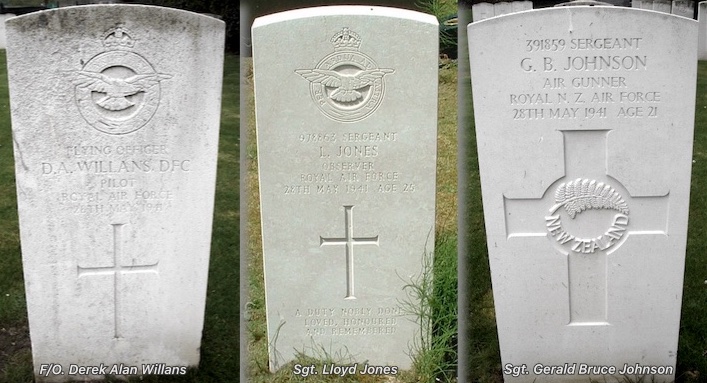 F/O. Derek Alan Willans DFC. Clymping Churchyard (St. Mary) Born on the 05th August 1920 Understood to be the son of Gilbert Rolland Sylvester and Ida Abigail (née Izod) of Twickenam, London, England. Listed on the Battle of Britain Memorial as one of the 'few'.

Air/Gnr: Sgt. Gerald Bruce Johnson. Clymping Churchyard (St. Mary) Born on the 04th September 1919 at Auckland, the son of Allan Cleveland Johnson and Lillian Beatrice Johnson, of Castor Bay, Auckland, New Zealand. Educated at Alfriston, Belmont and Mangere Bridge Schools. First job as a Clothing Assistant was at Waitemata Trading Company then at Hallenstein Brothers. 135 flying hours logged and having completed 20 operational sorties. Listed on the Battle of Britain Memorial as one of the 'few'.

Researched by Edward Paul for Aircrew Remembered and dedicated to the relatives of this pilot with thanks to the research by Errol Martyn and his publications: “For Your Tomorrow Vols. 1-3”, Auckland War Memorial Museum, Weekly News of New Zealand, other sources as quoted below:

At the going down of the sun, and in the morning we will remember them. - Laurence Binyon
All site material (except as noted elsewhere) is owned or managed by Aircrew Remembered and should not be used without prior permission.
© Aircrew Remembered 2012 - 2023 Last Modified: 15 March 2021, 20:43