Castles in the air full of cannon fire

Bombed Hitler to submission, then the Emperor of Japan;

Wright engines revving up to 285 MPH.

In its wartime roll: a warrior

A derivative became the B307 cargo and passenger plane.

B-17 replica in rods and joints, fitted out for gusto

For slide and buffet, slither and tumble

Into adventure, stretch physicality away from harm

Help on hand if you come a cropper… or just stumble.

Huge wheels that never take off.

Be a pilot. Keep the propeller turning.

Explore the fuselage of this self discovery aeroplane;

How far can you push yourself, by yourself… learning.

Climb to the heights, whoosh to the floor

Find out what those odd mirrors show

Always something new to keep you on the go.

To the tune of once upon

Carrying imagination on your shoulder

Roam then rush and roll

Spring and fall and ricochet

Everything and nothing your goal.

Evade and avoid, hide and seek

Leap and bounce and rebound

As much pioneering you as you can take

As much in the air as on the ground.

Here be laughter, not slaughter

Here be smile and squeal, not bomber engine drone

Here be joy… not fear

Here be a safe unknown.

All have shared this place

With wartime hopes of getting home.

Once bombers accelerated into chance return

Take off and… always land.

David explained to us what inspired him to write this:

I took my grandson to a ‘playframe’ birthday party, the Flying Fortress in West Sussex.It is a play centre with a central adventure frame approximating ing the B-17. I am a poet and got to contrasting the squeals of the children with the drone of war plane engines as this was a base for USA sorties into Germany in the 1940s.

Poem submitted to Aircrew Remembered by David Lockyer. David holds the copyright and permission must be sought to reprint, thank you. 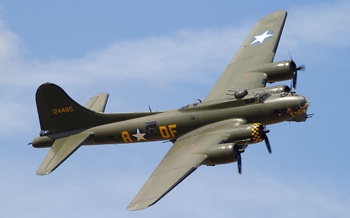 At the going down of the sun, and in the morning we will remember them. - Laurence Binyon
All site material (except as noted elsewhere) is © 2012 - 2021 Aircrew Remembered and owned or managed by us
and should not be used without prior permission.
• Last Modified: 26 May 2014, 08:11 •