Wing Commander Tom Neil, who has died aged 97, was one of the last surviving Battle of Britain aces; he flew more than 140 missions and shot down 14 enemy planes during the Second World War, making him a near triple ace - the term ace is given to a pilot who has shot down five enemy aircraft. He was was twice awarded the DFC.


Neil and his colleagues of No 249 Squadron joined the main battle when they flew their Hurricanes from their base in Yorkshire to Boscombe Down near Salisbury on August 15 1940. 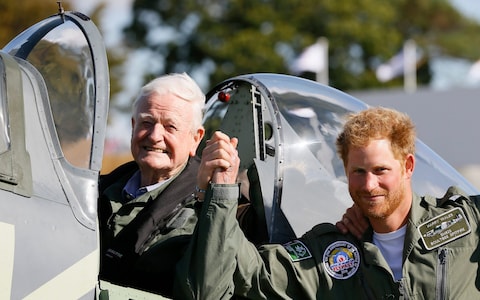 Serving between 1938 and 1964, Neil flew Hurricanes and Spitfires and received multiple awards for bravery, including the Distinguished Flying Cross and Bar and Air Force Cross.

Born in Liverpool, he first started flying with the Royal Air Force Volunteer Reserve while working in a bank, before joining 249 Squadron in 1940, when he was just 19 years old.

Based in Boscombe Down in Wiltshire and North Weald in Essex, Neil saw action immediately, often being scrambled four or five times a day, and flying 141 times in all. He remembered having to get off the ground in under three minutes. 'You're concentrating like mad, looking for the enemy as you get above the clouds,' he remembered. 'The adrenaline is racing, flak is bursting all around you, everything was exciting.'

'When you get back on the ground, you feel like a piece of chewed string. You think Christ, that was rather nasty.'

In May the following year, he followed his squadron to Malta, where he saw constant action. After 18 months, he returned to the UK to train other fighter pilots.

He retired from the RAF in 1964 and worked in the shoe industry but always maintained his links to the community of pilots who fought in the War. He regularly attended the Battle of Britain service at Westminster Abbey and to mark the 75th anniversary of the battle in 2015 once again flew in a Spitfire and was pictured with Prince Harry.

Tom Neil's middle son Patrick Neil, 69, said his father and his comrades were heroes because of their instinctive notion of duty. He added that his father's generation did not understand the term celebrity and had incredible humility. Neil subsequently wrote three autobiographies.

He was once asked, while giving a school talk, what counselling he was offered after the war. The schoolboy noted in his question that there was a high rate of attrition for pilots and a less than 50 per cent chance of survival. Patrick said his father's response was 'Counselling? You had enough trouble with the Germans.'

Wing Commander Neil, who lived near Bungay in Suffolk, died three days before his 98th birthday. He outlived his wife Eileen, who died in 2014.

The pair met at Biggin Hill while she was working as a WAAF officer and they were married for more than 70 years.

They had three sons, who survive him.

wordpress besucherzähler
© 2012 - 2022 Aircrew Remembered - All site material (except as noted elsewhere) is owned or managed by Aircrew Remembered and should not be used without prior permission.
• Last Modified: 10 April 2021, 14:18 •