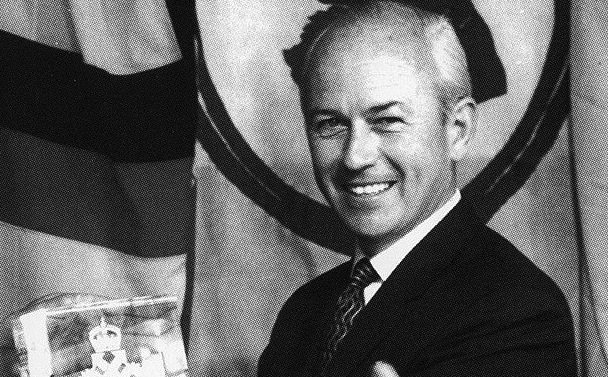 Chairman of the banknote printing company De La Rue and president of the CBI after gallant service as an RAF pilot during the Second World War.

The son of a Somerset farmer, Arthur Gordon Norman (always known as Gerry) was born at North Petherton, near Bridgwater, on February 18 1917 and educated at Blundell’s, where he was head boy.


When the family fell into financial difficulties, Gerry’s final year of schooling was paid for by his housemaster, whose cousin Bernard Westall, managing director of De La Rue, was then prevailed upon to find the boy a job.

‘Gerry’ Norman first joined De La Rue as a teenager in 1934 and was a dynamic force in its postwar progress away from its 19th-century origins as a printer of playing cards, postage stamps and banknotes, towards a diversified modern industrial group.


In 1939 Westall sent Norman to Shanghai to run a secret operation printing banknotes for Chiang Kai-shek’s Nationalist government (headquartered in Chongqing) under the noses of occupying Japanese forces in the international city. A printing plant was established in the French concession disguised as a playing-card factory; watermarked paper and printing plates were smuggled in, and the printed product dispatched in dustcarts. When the Japanese intercepted a consignment of paper and demanded it be burned, Norman offered to do so himself, salvaged half of it and maintained banknote deliveries in his own car.


After the outbreak of war in Europe, the printing equipment was smuggled from Shanghai to Rangoon, and Norman was posted to Argentina — but he soon returned to England to join the RAF.


He joined No 295 Squadron on its formation in August 1942. Initially equipped with Whitley bombers and later with Halifaxes converted to supporting the airborne forces, the squadron carried out leaflet drops over France.


In June 1943 it was engaged in towing troop gliders to North Africa in preparation for the Sicily landings.


During one operation, on September 18 1943, the Halifax piloted by Norman was en route from Portreath in Cornwall to Rabat in Morocco when it came under fire over the Bay of Biscay from three German Junkers Ju88s.


The glider pilot unselfishly cast off as Norman tried to evade the attackers. The Halifax sustained major damage, but its rear (and only) gunner, Sgt John Grant, succeeded in shooting down one of the Junkers. The glider was also shot down, but its occupants survived and the Halifax limped to Morocco on three engines. Norman was awarded a DFC and Grant a DFM.


In February 1944 Norman was promoted to squadron leader and tasked to form a new Halifax squadron, No 644, in preparation for the D-Day landings.


On the night of June 5/6, 20 aircraft towed gliders across the Channel before returning to refuel and take 16 more later that night. On the following nights, resupply sorties were flown.


Norman and his squadron were heavily involved in Operation Market, towing gliders to Arnhem on two days. No 644 then returned to providing supply drops for SOE, including numerous sorties to Norway. In January 1945 Norman was awarded a bar to his DFC for ‘consistently displaying gallantry and devotion to duty of a high order’.


On demobilisation he rejoined De La Rue, becoming a director in 1951 and works manager of its printing plant at Bunhill Row in the City. Two years later, when Westall (by now chairman) came under pressure to bring new blood into the top management, Norman — still in his mid-thirties — was appointed managing director.


During his senior career Norman was also chairman of the industrial conglomerate Thomas Tilling, vice-chairman of Sun Life Assurance, and a director of BOAC, Kleinwort Benson and the British arm of the Swedish ball-bearing maker SKF.


As managing director from 1953 to 1964, Norman drove the creation of the Security Express courier business and the establishment of the kitchen-surface brand Formica. As executive chairman from 1964, he oversaw the acquisition of a major printing rival, Waterlow, the sale of De La Rue’s historic playing-card business, and an expansion into the manufacturing of all kinds of cash-handling equipment.


He also fought off an unwelcome takeover bid from the Rank Organisation, which was rejected by the Monopolies Commission as being against the public interest.


An energetic and determined manager, Norman was not always easy to work for: it was best to approach him by means of a succinct memo rather than in person; and woe betide any underling who did not have a quick, clear answer to a question from his office. But he was very straight in his dealings, and a great encourager of promising young executives and those with good ideas — among them John Shepherd-Barron, the De La Rue executive who in 1965 (while in his bath) came up with the first designs for ‘hole in the wall’ automatic cash machines.


Since 90 per cent of De La Rue’s printing contracts were with foreign governments, Norman was also required to be a high-level international salesman.


For many years he was the polished host of the annual De La Rue dinner for the London diplomatic corps.


He developed a taste for forthright public discourse as president of the CBI from 1968 to 1970 — an era characterised by union strife, wage inflation, Labour government interventionism and repeated balance of payments crises. His particular hobby horse was an ‘investment famine’ in British industry, which he urged the City and successive governments to rectify as ‘the first priority for the 1970s’.


During Norman’s CBI tenure, his chairmanship at De La Rue became of necessity a part-time role — but when his successor as managing director resigned abruptly after a boardroom row in 1972, Norman took up the executive reins again until 1977. He reverted to non-executive chairman for a decade thereafter, to complete 53 years of company service.


In later years, however, he devoted much of his energy to environmental issues. He twice served as chairman of the trustees of the World Wildlife Fund, where he succeeded the founder Sir Peter Scott in 1977.


Norman also found time for golf and country sports, and an interest in horses. Saturday afternoons often found him in front of his television with form book and telephone at his side, and in retirement he owned or part-owned a number of good horses, notably Airwave, which was pipped for the 2003 Golden Jubilee Stakes at Royal Ascot.


Gerry Norman married, in 1944, Margaret (Peggy) Harrington, with whom he had three sons and two daughters. They had first met when she was a coastal radar operator and he was flying from Tarrant Rushton in Dorset — the county where they eventually made their home, and where he had a special love of woodlands. A confirmed atheist, he once gestured around a favourite glade and declared: ‘This is my church.’


Lady Norman died in 1982. In old age Sir Arthur moved to Australia, where three of his children had settled.

Add us to your address book. Click here
© 2012 - 2021 Aircrew Remembered - All site material (except as noted elsewhere) is owned or managed by Aircrew Remembered and should not be used without prior permission.
• Last Modified: 04 April 2019, 16:29 •