The Nazis called them “Night Witches” because the whooshing noise their plywood and canvas airplanes made reminded the Germans of the sound of a witch’s broomstick.

The Russian women who piloted those planes, onetime crop dusters, took it as a compliment. In 30,000 missions over four years, they dumped 23,000 tons of bombs on the German invaders, ultimately helping to chase them back to Berlin. Any German pilot who downed a “witch” was awarded an Iron Cross.

These young heroines, all volunteers and most in their teens and early 20s, became legends of World War II but are now largely forgotten. Flying only in the dark, they had no parachutes, guns, radios or radar, only maps and compasses. If hit by tracer bullets, their planes would burn like sheets of paper.

Their uniforms were hand-me-downs from male pilots. Their faces froze in the open cockpits. Each night, the 40 or so two-woman crews flew 8 or more missions — sometimes as many as 18.

“Almost every time we had to sail through a wall of enemy fire,” Nadezhda Popova, one of the first volunteers — who herself flew 852 missions — said in an interview for David Stahel’s book “Operation Typhoon: Hitler’s March on Moscow, October 1941,” published this year. 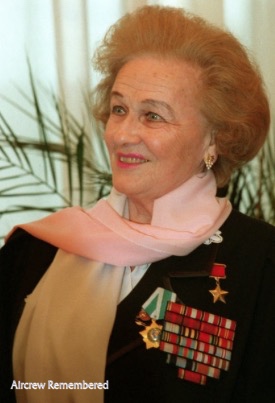 Ms. Popova, who died at 91 on July 8 in Moscow, was inspired both by patriotism and a desire for revenge. Her brother was killed shortly after the Germans swept into the Soviet Union in June 1941, and the Nazis had commandeered their home to use as a Gestapo police station.

In “Flying for Her Country: The American and Soviet Women Military Pilots of World War II” (2007), by Amy Goodpaster Strebe, Ms. Popova is quoted recalling the “smiling faces of the Nazi pilots” as they strafed crowds, gunning down fleeing women and children.

But Ms. Popova, who rose to become deputy commander of what was formally known as the 588th Night Bomber Regiment, said she was mostly just doing a job that needed doing. “We bombed, we killed; it was all a part of war,” she said in a 2010 interview with the Russian news service RIA Novosti. “We had an enemy in front of us, and we had to prove that we were stronger and more prepared.”

As the war began, Moscow barred women from combat, and Ms. Popova was turned down when she first tried to enlist as a pilot. “No one in the armed services wanted to give women the freedom to die,” she told Albert Axell, the author of “Russia’s Heroes: 1941-45” (2001).

But on Oct. 8, 1941, Joseph Stalin issued an order to deploy three regiments of female pilots, one of which became the Night Witches. The Russian pilot corps clearly needed bolstering; in addition, some have pointed out, heroic women made good propaganda. The lobbying of Marina Raskova, who had set several flying records and became the first commander of the women’s units, helped greatly.

Nadezhda Vasilyevna Popova was born in Shabanovka in Ukraine on Dec. 27, 1921. Viktor F. Yanukovich, the president of Ukraine, announced her death.

Growing up, Ms. Popova told Ms. Strebe, “I was a very lively, energetic, wild kind of person. I loved to tango, fox trot, but I was bored. I wanted something different.” 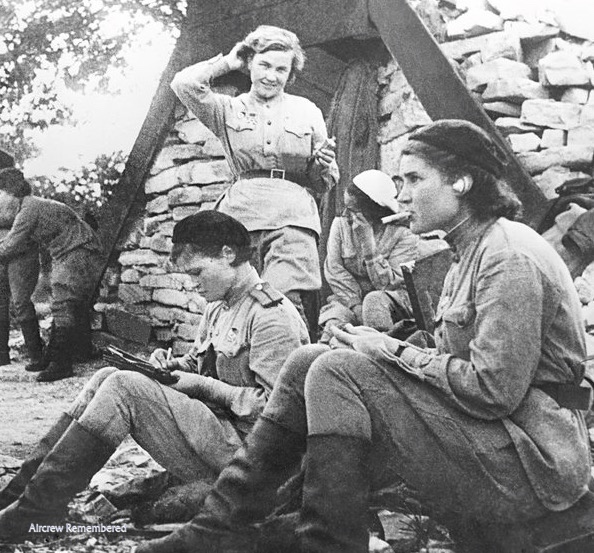 Ms. Popova, standing, with other Soviet pilots in World War II. “We bombed, we killed; it was all a part of war,” she said in 2010. (Credit RIA-Novosti, via The Image Works)

At 15, Ms. Popova joined a flying club, of which there were as many as 150 in the Soviet Union. More than one-quarter of the pilots trained in the clubs were women. After graduating from pilot school, she became a flight instructor.

Her delight at being accepted into the 588th Night Bomber Regiment gave way to steely seriousness after her first mission, in which a Soviet plane was destroyed, killing two friends. She dropped her bombs on the dots of light below. “I was ordered to fly another mission immediately,” she told Russian Life magazine in 2003. “It was the best thing to keep me from thinking about it.”

Ms. Popova became adept at her unit’s tactics. Planes flew in formations of three. Two would go in as decoys to attract searchlights, then separate in opposite directions and twist wildly to avoid the antiaircraft guns. The third would sneak to the target through the darkness. They would then switch places until each of the three had dropped the single bomb carried beneath each wing.

The pilots’ skill prompted the Germans to spread rumors that the Russian women were given special injections and pills to “give us a feline’s perfect vision at night,” Ms. Popova told Mr. Axell. “This, of course, was nonsense.”

The Po-2 biplanes flown by the Night Witches had an advantage over the faster, deadlier German Messerschmitts: their maximum speed was lower than the German planes’ stall speed, making them hard to shoot down. The Po-2s were also exceptionally maneuverable. Still, Ms. Popova was shot down several times, although she was never hurt badly.

Once, after being downed, she found herself in a horde of retreating troops and civilians. In the crowd was a wounded fighter pilot, Semyon Kharlamov, reading “And Quiet Flows the Don,” Mikhail A. Sholokhov’s epic Soviet novel. They struck up a conversation, and she read him some poetry. They eventually separated but saw each other again several times during the war. At war’s end, they met at the Reichstag in Berlin and scribbled their names on its wall. They soon married.

Mr. Kharlamov died in 1990. Ms. Popova, who lived in Moscow and worked as a flight instructor after World War II, is survived by her son, Aleksandr, a general in the Belarussian Air Force.

Ms. Popova was named Hero of the Soviet Union, the nation’s highest honor. She was also awarded the Gold Star, the Order of Lenin and the Order of the Red Star.

“I sometimes stare into the blackness and close my eyes,” Ms. Popova said in 2010. “I can still imagine myself as a young girl, up there in my little bomber. And I ask myself, ‘Nadia, how did you do it?’ ”

Add us to your address book. Click here
© 2012 - 2021 Aircrew Remembered - All site material (except as noted elsewhere) is owned or managed by Aircrew Remembered and should not be used without prior permission.
• Last Modified: 17 December 2015, 17:27 •