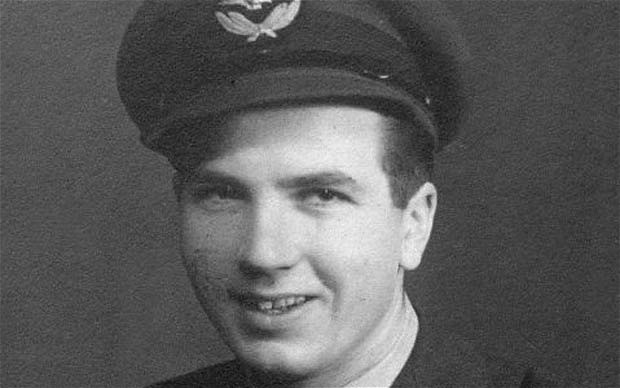 Flight Lieutenant Ken Trott, who has died aged 90, had a miraculous escape when his Typhoon fighter was involved in a mid-air collision over Normandy in 1944. On the evening of July 13th that year, four Typhoons of No 197 Squadron took off from an advanced landing ground in Normandy to carry out an armed reconnaissance sortie near Caen. Trott and his number two strafed an armoured vehicle, and were rejoining their two colleagues when a large force of Messerschmitt Bf 109s attacked.

Trott saw one of the enemy aircraft approaching him, and made a head-on attack firing his cannons. As he broke away, the starboard wing of his Typhoon struck the Bf 109. In the collision his head and shoulder struck the side of the fuselage as the canopy disappeared, his helmet, oxygen mask and goggles were torn off him, and he was catapulted into the air with only his parachute intact. Having succeeded in pulling the ripcord, Trott lost consciousness. He woke up to find himself suspended from a tree and surrounded by armed German soldiers. He spent the rest of the war as a PoW, much of the time in the hospital at Stalag Luft III.

In 1990 Trott and his wife returned to France to search for the spot where he had bailed out. When they approached a farmer and explained the reason for their visit, he revealed that, as a 12-year old boy, he had witnessed the collision of the two aircraft and Trott’s subsequent descent by parachute.

Kenneth Albert John Trott was educated at Charminster School. At the age of 18 he joined the RAF Volunteer Reserve, going on to train as a pilot in Canada.

In April 1943 he joined No 195 Squadron, flying Typhoons on patrols over the North Sea and the Netherlands. He transferred to No 197 in early 1944, when the Typhoons were equipped with bomb racks under each wing. Trott dive-bombed radar installations and the new V-1 launch sites in the Pas de Calais in preparation for the D-Day landings.

On the evening before the Normandy landings, he carried out an operation on the French coast and noted in his logbook that there were large convoys of LCTs [Landing Craft, Tanks] heading towards Cherbourg. It was, he said, ‘a fantastic sight, and it seemed impossible that the Germans did not know what we were up to’.

The Typhoon squadrons were heavily involved in supporting the landings and the establishment of the bridgehead. Trott attacked enemy armour, transport and supply dumps. On July 8 his squadron moved to a rudimentary landing ground near St Croix, which allowed the Typhoons to range deeper into enemy-occupied France.

After his capture Trott spent many months in medical care and was evacuated from Stalag Luft III by train to Stalag VIIA at Mooseberg near Munich in early February 1945, before being liberated by the Third American Army on April 29. He had a spell as an air traffic controller before leaving the RAF in December 1946. He rejoined the RAF Reserve, completing his annual refresher flying training until 1956.

Trott spent all his working life with Robert Old and Co, the menswear outlet, serving for many years on the board of directors and as the company’s secretary. He was later appointed chairman, and finally retired in 1987, although he continued to advise the company until 2002.

A passionate follower of football and cricket, he was also a fine fly fisherman and enjoyed sailing off Brownsea Island. In 2005 he published a memoir, ‘My War’.

‘Further information on his loss page.’

Add us to your address book. Click here
© 2012 - 2022 Aircrew Remembered - All site material (except as noted elsewhere) is owned or managed by Aircrew Remembered and should not be used without prior permission.
• Last Modified: 08 August 2014, 13:29 •