Taking off at 17:10 hrs from RAF Syerston in Nottinghamshire for an operation on Munchen. One of 137 aircraft that took off on this operation to Munich. Most of the bombs fell outside the target area in open ground. 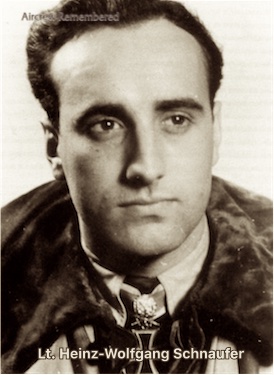 The Luftwaffe patrols found human remains in the debris and stored them in two coffins. These meagre remains were given two crosses with the words "Unnbekannter Fliegern" (Unknown Fliers) and were buried ten days later, probably because of the winter conditions. It was not until 1947 that the CWGC found the two graves actually held the remains of three casualties.


(1) 32-year-old farmer Emiel Deriemaecker from Staden later said: "On the evening of 22nd December 1942, at around 5 pm, I went to the attic of our home to get some food, to my great surprise the door was locked on the inside with a wood bolt. With a little effort I was able to open the door and when I took a few steps into the attic, I saw a man sitting the darkness smoking a cigarette,. When I appeared he grabbed his knife with a quick gesture. He spoke to me in a language I didn't understand, raising his two fingers in the air, which probably meant a V-sign. At a certain moment he stuck his finger at me and said something about "friend." I said "Yes, Belgium." I told him to come down, and with signs and gestures that we would give him food and clothes, and with little fear he followed me to the kitchen where he immediately moved to the stove, he was cold, and especially thirsty. He was not hungry. I closed the door behind us, as the Germans were everywhere looking for the missing crew.

He was a New Zealander by birth, was slender and about 1m 70cm tall no more than 22 years old, black-haired, combed on a parting. He wore blue uniform, a battle dress, without a hat, with a copper crown on the left sleeve and three triangular stripes. On the chest he had a wing whose top was facing the arm. He also wore fine black socks, a civilian jumper and a khaki shirt. As we almost did not understand him, we wanted to go to a person who knew the English language, but he did not want to know about it, as he was very frightened and very suspicious. He showed his map in light silk, and showed us the place where he must have landed. He also expressed the wish to leave for Gibraltar. By signs and gestures, we finally understood each other more or less. He had bombed Munich, and on his return his plane crashed into the "Schabalie" district in Poelkapelle.

Five members of the crew may have have bailed out, two others had died in the aircraft crash, which later proved to be correct. Three of his companions surrendered at an inn in the "Vijfwegen" district, as they found no civilian clothing, and the Germans were already in the area.

In my opinion this flyer was the pilot, as he spoke this word several times. However, it is also possible that I did not understand him correctly. Immediately after he landed he fled from that place, and arrived at our farm that same night. After taking a few bags to lie on, he crawled into the attic to hide there. He must have been there all day until the moment I discovered him. After he ate, drank, and warmed himself, I gave him my clothes: gray trousers and vest, an old brown jacket and a blue sash with green stripes at the end. He had a sort of white first-aid kit which held exactly 1150 francs of Belgian money and probably the same amount of French money. He didn't know which money to use at first. He also had a whistle with him. The word "Sheffield" was written on his knife which was in a leather sheath.

He had left his clothes with us, I had the pants dyed and worn throughout the entire occupation. A few English coins were in the pockets. I still have the following supporting documents in my possession: a few English coins, the brass crown, the whistle and the trousers that are worn out. We burned the rest, since we also feared the Germans searching the house. We did not dare to hide him for this either. He would have preferred to have left too. However, we felt sorry when we saw him leave for the unknown in the cold night. He also had a backpack with him, which we had stuffed with bread, tobacco and cigarette papers. When he left, we had first thought to ask for his name. Due to our excitement and enthusiasm, we had not thought of it. For the sake of caution, we have not disclosed our name to him either.

I was, and am still pleased to have helped an Allied fighter. I do not want any reward for this, but I would be very pleased if I knew his name and address from that airman to know whether he had arrived well and good. Probably this pilot must have fallen into the hands of the German-minded farmer V. from Boezinghe, who told the Germans about him. The personal descriptions and dates are very similar. "

That strange visitor was Flt.Sgt. J A Shepherd, the New Zealand tail gunner (sic). He was indeed taken prisoner, just like Sgt Leedham, Sgt Elsom and Sgt Ward. Because they owed their lives to their pilot Sgt Brinkhurst, who kept his aircraft level until the last moment, he was posthumously awarded the DFM. (Belgium Aviation History Association)

The Squadron lost another crew on this operation:

Lancaster I R5574 Flown by 20 year old, F/O. Grimwood Choke Cooke DFC DFM 80346 RAFVR. Lost with 5 other crew, 1 taken PoW. Sadly, the family of F/O. Cooke also lost his twin brother, shortly before on the 26th June 1942. Sgt. Harold Cooke, an air gunner with 10 Operational Training Unit (just 1 of 4 losses from 10 OTU on this night) Flying in Whitley V AD689 on an operation to Bremen - all 5 crew killed. The twins were from Bulawayo, Southern Rhodesia.

Lt. Heinz-Wolfgang Schnaufer (nicknamed the “Night Ghost of Trond”) went on to obtain a total of 121 to his credit. He survived the war taking over his family wine business, but was killed in a car accident, France, on 13th July 1950. 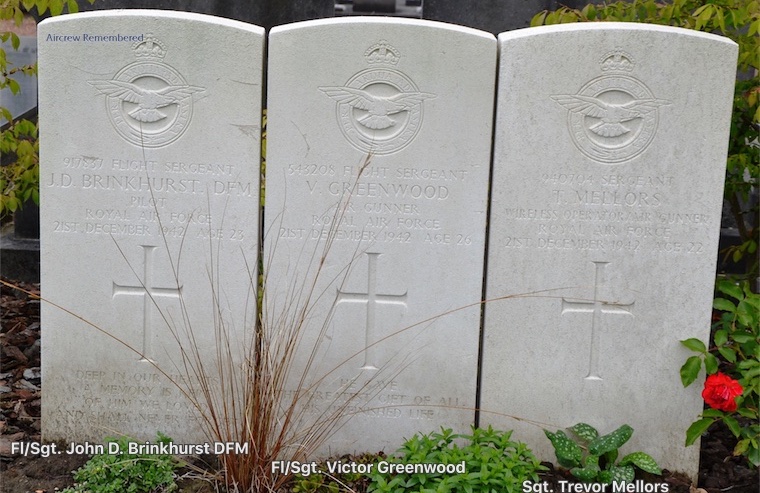 Researched and dedicated to the relatives of this crew with thanks to Franky Mahieu who visited the crew graves for us and took these fine photographs. He has provided us with permission to permit high resolution copies of these to any of the relatives free of charge. Thanks to John Jones for the information from the Belgium Aviation History Association.

At the going down of the sun, and in the morning we will remember them. - Laurence Binyon
All site material (except as noted elsewhere) is owned or managed by Aircrew Remembered and should not be used without prior permission.
© Aircrew Remembered 2012 - 2021 Last Modified: 17 March 2021, 20:48