Badge: An oak leaf. The unit was formed at Stonehenge and it adopted an oak leaf as a badge being symbolic of strength and age. Authority: HM King George VI, July 1938.

Took off from RAF Kabrit at 20.20 detailed to attack the harbour and shipping at Tobruk, Libya. On the return journey it became evident that they had insufficient fuel left to reach RAF Kabrit and being unable to find LG224 at Cairo West Kilo 26* (Gebel el mansuriya) made for RAF Heliopolis in North East Cairo. 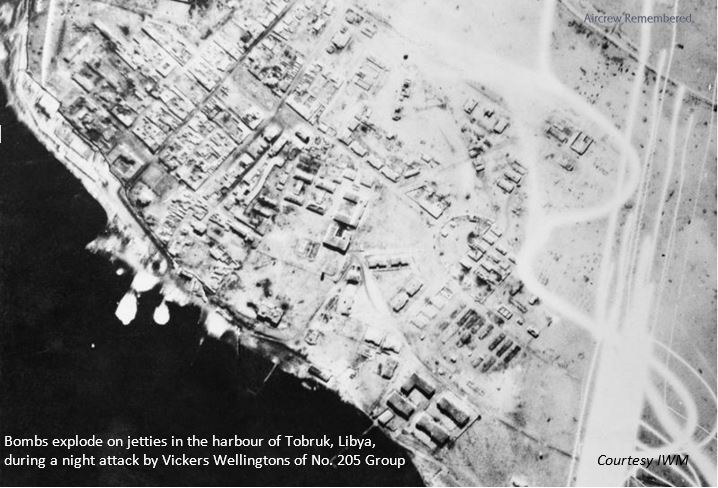 The initial Cypher report to Air Ministry, Kingsway, Melbourne reported that the crash occurred at 04.30 on 12 July and that the aircraft had "Approached aerodrome too high on attempting to land, opened up throttle to circle aerodrome again but aircraft stalled and crashed."

In his book "Bomber Losses in the Middle East and Mediterranean" David Gunby adds that DV674 "collided with [Wellington] AD601 on overshoot".

Bob Chalmers and Thomas Roberts, the two pilots, were killed in the crash. Ivor Thomas the front gunner sustained serious multiple injuries and was admitted to 9 British General Hospital Cairo. Wireless Operator Harvey Wigley was admitted to the RAF Hospital with cuts and concussion whilst Observer Maurice Richards and Rear Gunner Sergeant Luck although admitted to Station Sick Quarters (SSQ) at Heliopolis with slight injuries were discharged to duty the following day 13 July. 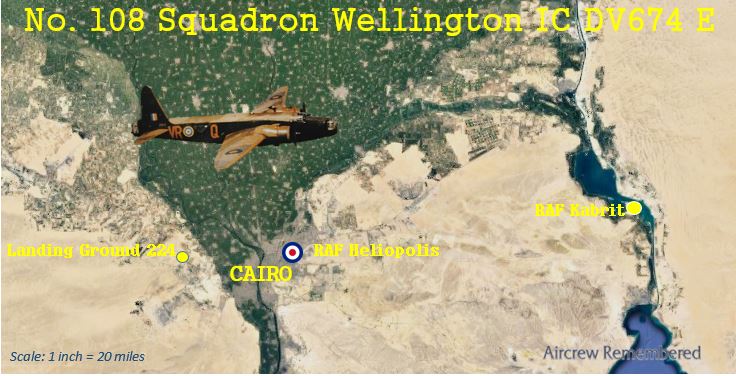 In a statement dated 13 July 1942 the Observer Sergeant Maurice David Richards reported that:

"At about half-way to the target, the pilot said that he had no control on the throttling of the starboard engine. Owing to this defect he was forced to keep the mixture at "rich". Due to this we had very little petrol left when we reached the Nile Delta. We reached the Nile and from there we got 2 QDMs [Magnetic headings] to Heliopolis Aerodrome.

The pilot hardly recognised it as an aerodrome and in my opinion was confused by the lights from the Prisoner of War Camp. After circling approximately 4 or 5 times he was forced to land. Being unable to see anything of the outside from my position this is the last evidence I can give till we hit the ground. 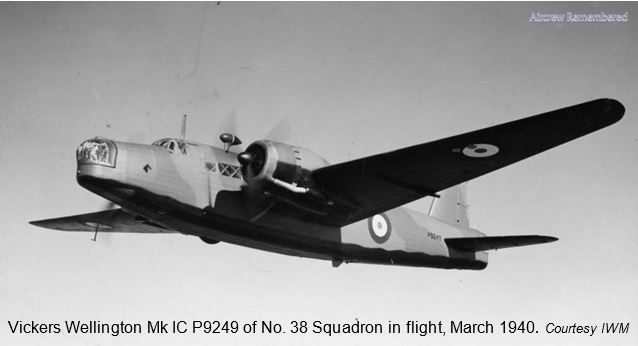 Although this was my first flight with F/Sgt. Chalmers (the Captain) he seemed an excellent pilot throughout the trip."

"On landing, our aircraft collided with two other aircraft which were stationary and caught fire." He timed the accident as 04.00 hours and said that he was then admitted to RAF General Hospital (Egypt) suffering from concussion, broken ribs and cuts to both legs and face which were stitched.

On 14 August 1942 the Commanding Officer of 108 Squadron stated that he was "satisfied that the holding of a Court of Inquiry or Investigation would add nothing to the report."

BIOGRAPHICAL DETAILS OF THE CREW

(1) WO2 Robert Allan Arthur (Bob) Chalmers was born 4 September 1922 at Edmonton, London the son of Wing Commander Frederick Cyril Chalmers and Millicent E. Chalmers nee Brown of 12 Church Avenue, Ruislip, Middlesex. He had no known siblings. His father was in the RAF Accountants Branch and in 1942 was stationed at AHQ West Africa.

Bob Chalmers was a boarder at Queen Elizabeth's Grammar School, Wimborne in Dorset from 1935 to 1940. He excelled at Boxing, won his colours at Swimming and in 1938 was awarded a prize for Art. In 1939 he played in the Soccer XI. He also displayed commendable acting skills in school plays. By the autumn of 1940 he was at No. 1 Manning Depot at RCAF Toronto, Ontario and in the summer of 1941 was flying Wellingtons operationally with 108 Squadron in the Middle East.

He is commemorated on the Queen Elizabeth's Grammar School War Memorial

(2) Sgt. Thomas Leslie Roberts was born on 30 April 1911 at Sedgefield, Durham the son of Evan Roberts and Jane Turner Roberts nee Wilson, of Ferryhill, Co. Durham. He had two brothers and four sisters.

In 1934 he married Edith Kelly at Sedgefield. Prior to joining the air force he was a Wood Making Machinist and lived at 4 Windsor Avenue, Spennymoor, Durham

Commemorated in the Ferryhill Book of Remembrance

(3) Fl/Lt. Maurice David Richards DFC was commission as a Pilot Officer (serial number 171699) on probation (emergency) on 2 Dec 1943 (London Gazette 14 March 1944) confirmed in this appointment and promoted to Flying Officer (war subs) on 2 June 1944 (London Gazette 7 July 1944). On 13 October 1944 whilst serving with No. 571 Squadron he was awarded the Distinguished Flying Cross (London Gazette 13 October 1944). His promotion to Flight Lieutenant on 2 December 1945 was promulgated in the London Gazette of 4 January 1946) Nothing further known - if you have any information please contact our helpdesk 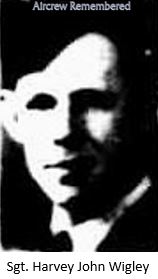 Prior to enlisting on 1 February 1941 he was employed in the Telephone Section of the GPO at Adelaide. On 2 June 1941 he became engaged to Joan Dorothy Cocks of North Adelaide and later embarked for overseas duty on 16 October 1941 disembarking at San Francisco USA on 4 November 1941.

He was killed on 7 December 1942 when his aircraft Wellington HF834 of No. 40 Squadron, piloted by F/O. Angus Douglas Bell, crashed during a raid on Bizerte docks. He was buried at Catania War Cemetery, Sicily.

He is commemorated on the Australian War Memorial, Canberra - Panel No. 132 and on the Glen Osmond War Memorial South Australia

(5) Sgt Ivor Meredith Thomas was born on 25 March 1916 at Preston, Lancashire the son of John Ivor and Constance Thomas nee Imison. In 1939 he married Phyllis Mary Bayne at Alcester, Warwickshire and they lived at Bideford-on-Avon, Warwickshire. They had one known child, a daughter Mary P. Thomas born in 1940 at Bilston, Staffordshire.

He was killed on 6 February 1943 whilst serving with No. 37 Squadron and was buried at the Salerno War Cemetery, Italy.

He is commemorated on the Bideford on Avon War Memorial, Warwickshire.

(6) Sgt. R.W. Luck - Nothing further know, if you have any information about him please contact our helpdesk.

Higher no man can aspire

More he cannot give,

To die that others may live

With thanks to the sources quoted below.

At the going down of the sun, and in the morning we will remember them. - Laurence Binyon
All site material (except as noted elsewhere) is owned or managed by Aircrew Remembered and should not be used without prior permission.
© Aircrew Remembered 2012 - 2022 Last Modified: 18 March 2021, 12:40