Taking part in a ‘Ramrod during the afternoon of the 07th January 1944. A mid-air collision with another Typhoon from the same squadron at 16:30 hrs.

In a statement later made by W/O. Ronald Venning Smith (later Fl/Lt) AUS/413800 RAAF he describes the events that day:

"I was flying No. 2 to Fl/Lt. Cobbett and was briefed to dive bomb a Buzz bomb site near Abbeville. My No. 1 went into a very steep dive at this moment another squadron was diving at right angles to us at the same target which attracted my attention as it looked as they would pass very close to us in our dive. When I was in my dive I couldn’t see my No. 1 so I jettisoned both my bombs and pulled out to the side as I thought that when he pulled up out of his dive I wouldn’t be in his road.

I was climbing when the collision happened. This was about 8,000 ft. The plane seemed to hit my tail and then when I looked to port I could see the other Typhoon locked under my port wing. That is all I remember till I woke up about 2 hours later and the Luftwaffe were dragging me across the field. I was too dazed to see where the aircraft crashed."

"Whilst at Frankfurt Interrogation centre I met Fl/Sgt. Renshaw who was from 175 Squadron and had crash landed on the 06th (a day previous to me) in the same area. He said that the Germans took him to identify the body of Fl/Lt. Cobbett. The only thing that he could identify him by was the white lanyard which all 174 used to wear. He aid that the body was not broken about. They then put Fl/Lt. Cobbett into a truck and that is the last he saw of him." 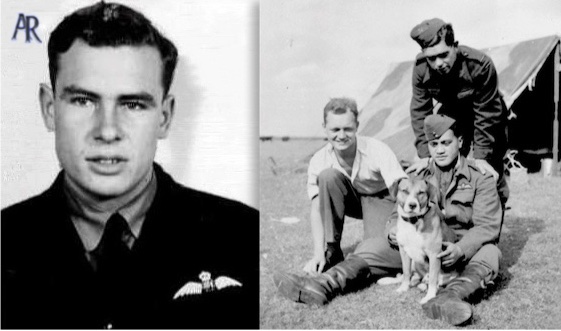 Notes: W/O. Ronald Venning Smith was flying Typhoon Ib JR373 - suffered concussion, a wound to the left thigh and broken ribs during his descent. Served out the remainder of the war as PoW No 270083 until the 23rd April 1945 when he was liberated by the Russians. Born on the 29th September 1921 and lived at Wyalong, New South Wales, Australia. Fl/Sgt. Gilbert L. Renshaw 1425203 RAFVR was shot down in Typhoon Ib JR190 and also taken PoW.

Researched and dedicated to the relatives of this pilot with thanks to Eugenie Brooks, Julian Proddow, National Archives of Australia, other sources as quoted below:

At the going down of the sun, and in the morning we will remember them. - Laurence Binyon
All site material (except as noted elsewhere) is owned or managed by Aircrew Remembered and should not be used without prior permission.
© Aircrew Remembered 2012 - 2021 Last Modified: 01 April 2021, 14:09