Another huge operation directed against Dortmund, the fourth of the war. 826 aircraft taking part with 343 Lancasters, 199 Halifaxes, 151 Wellingtons, 120 Stirlings with 13 Mosquitoes taking part. The pathinders marked the target with great accuracy in almost perfect weather conditions - the complete operation was classed as a successful raid with bombing taking place between 01.03 - 02.10 hrs.

Large areas of the city to the north and east were devastated - 2000 buildings destroyed with major damage caused to many industrial buildings. In particular the Hoesch steelworks which had its production ceased. 599 people killed on the ground with 1,275 injured - some 25 others missing!

Some 38 aircraft from the allies did not return, many others arrived home with battle damage. No reports found identifying a claim by the Luftwaffe night fighters for this Halifax, it is thought ‘probable’ they were brought down by anti-aircraft fire over the target.

(2) The family of P/O. Livermore also lost his younger brother, P/O. Carl Herman Livermore J/95258 RCAF on the 25th April 1945. On an operation to Wangerooge to attack gun positions with 76 Squadron on Halifax VI RG591 MP-A when the aircraft was involved in a midair collision with another 76 Squadron Halifax VI (RG553 MP-T) All 7 crew killed, 6 other crew killed on the other Halifax, 1 taken PoW. 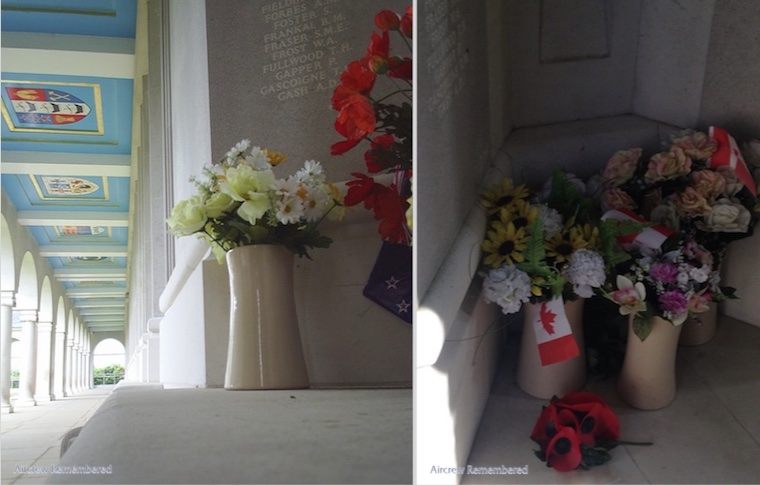 Fl/Sgt. David Slabotsky. Runnymede Memorial. Panel 185. From Montreal, Quebec, Canada, next of kin details not available - can you assist?

At the going down of the sun, and in the morning we will remember them. - Laurence Binyon
All site material (except as noted elsewhere) is owned or managed by Aircrew Remembered and should not be used without prior permission.
© Aircrew Remembered 2012 - 2021 Last Modified: 22 September 2015, 19:37