Taking part in a Circus when due to appalling weather conditions (thick fog) on the return he collides with another Hurricane (V6618) piloted by P/O. Bronisława Franciszek Wydrowski (1) P-0316 who managed to bale out saving his life.

In December 2015 Mr. John Cooper contacted us and is in the process of transcribing his fathers wartime letters (2012095 Spr. J.F. Hopper of the 263rd Company, Royal Engineers) In one of the letters he described this event:

“There’s an awful lot of planes flitting about, just missing the house tops. Talking about planes I saw a terrible accident the other day. I’m not sure whether it was Tuesday or Wednesday. There was about a dozen Hurricanes on patrol or whatever it’s called and two of them collided. They came down locked together but one of the pilots managed to bail out. The other one must have been killed or badly injured because we only saw one parachute coming down. Really darling it was a terrible sight. If it had been two Jerry planes I’d probably have been cheering but as it was I felt sort of sick.” 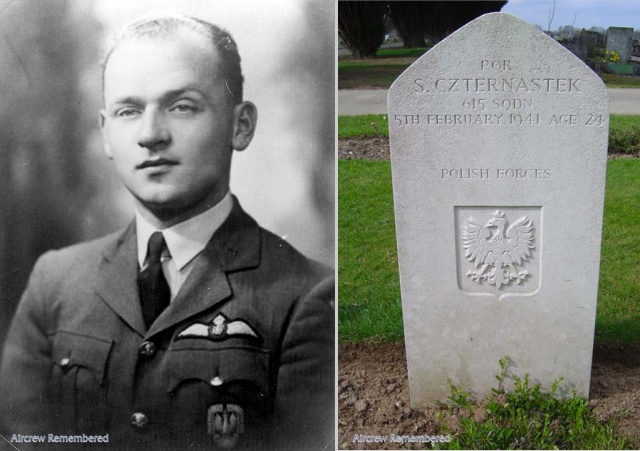 Another Hurricane from 615 Squadron was lost this day, that of Sgt. Owen Michel Jenkins 748164 RAFVR in Hurricane I V6980 who was shot down over Calais, France and buried at Bellebrune Churchyard.

F/O. Stanislaw Czternastek CV and bar. Hawkinge Cemetery, Kent. Area O. Grave 37. Further information: Son of John and Anna, born in Przemyśl, Poland on the 6th May 1916. Trained (Conversion being a better description, as already an experienced pilot in the Polish Air Force) in UK at 6 OTU at Sutton Bridge with his first posting to 32 squadron for the 'Battle of Britain'. Joining 615 Squadron in December 1940.

At the going down of the sun, and in the morning we will remember them. - Laurence Binyon
All site material (except as noted elsewhere) is owned or managed by Aircrew Remembered and should not be used without prior permission.
© Aircrew Remembered 2012 - 2022 Last Modified: 06 August 2021, 17:00