The town of Krefeld was of great industrial importance, being the centre for textile, silk and parachute fabric manufacture. It was also the home of the Deutsche Edelstahlwerke, a steel manufacturing combine manufacturing 200,000 tons of special high grade steel per year for Krupps and other armament industries.

A force of 705 aircraft made up of 262 Lancasters, 105 Wellingtons, 117 Stirlings, 209 Halifaxes and 12 Oboe Mosquitoes was despatched on this raid. Of these, 619 carried out a devastating attack on the town of Krefeld that was accurately marked by the Oboe Mosquitoes. The attack commenced at 01.27 hrs and continued until 02.20hrs. There was 75% full moon over the target area and very little cloud with moderate to good visibility. Over the target area only a small number of searchlights were in operation, heavy flak was described as moderate and there was little light flak. 3 aircraft are thought to have been lost to flak and 4 to fighters in the target area. 2 aircraft attacked the alternative target, 42 aircraft were forced to abort the mission mainly due to technical and manipulative problems. 42 aircraft were lost, at least 30 of them falling to enemy fighters, the moonlight conditions no doubt contributing greatly to their success. 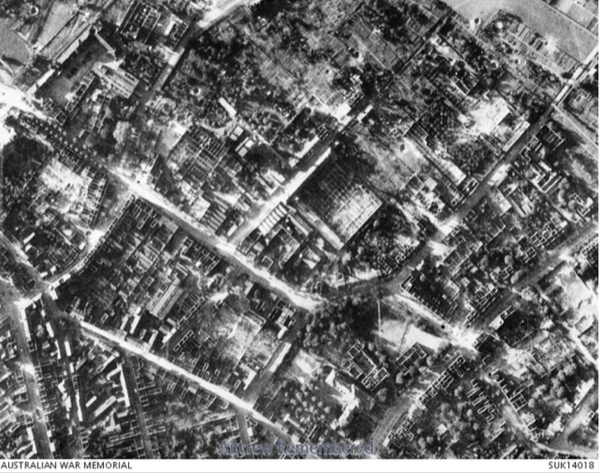 More than half the town was destroyed by fire with 60% of the buildings in the fully built up area being destroyed and 25000 housing units rendered uninhabitable. Many public buildings were destroyed and the gas works, factories and military barracks severely damaged. The damage was concentrated in the centre of the town but rapidly spread to the north and east due to fires that raged for several hours unchecked. 1056 people were killed and 4550 injured.

Bomb aimer F/O. Hagan reported that the target was bombed from 20000’. He believed that after bombing the target the pilot turned right instead of left and set course for Noordwijk. ‘Five minutes after the bombing Monica gave a warning and the captain warned the rear gunner to look out’. The Halifax was then at 16000’ and in bright moonlight. ‘Almost at once the rear gunner saw a ME210 and opened fire with two short bursts’. He told the captain to corkscrew. They lost the enemy aircraft and the rear gunner claimed it as a possible damaged. ‘However, enemy aircraft renewed attack from astern and put intercom u/s’. There was a pungent smell in the nose of the aircraft and he (F/O Hagan) noticed a glow between the port inner and outer engines but no flames. The navigator baled out and the aircraft went into a diving right hand turn. F/O. Hagan landed about (3?) m. east of Esch. While falling he ‘saw an aircraft on fire in the sky circling to the right and there was a thud when it hit the ground'. He heard that:

(1) 'The aircraft (was not?) burnt out, the pilot was dead at the controls, another member baled out but his parachute did not open and 4 members (2 wounded) were captured'.

(2) 'The pilot made a good jump and the aircraft was burnt out’.

He adds 'Later heard that two aircraft crashed near here that night’.

F/O. Hagan escaped with others from Holland by motor boat. Its engine failed however, and after being adrift for four days was eventually picked up by HMS Garth.

(1) Fl/Sgt. John Gardner – nothing further known, are you able to assist?

(2) Fl/Sgt. Sidney Henry Alfred Nicholson – nothing further known, are you able to assist?

RAFVR - 1048636 Leading Aircraftman Alfred Hagan was commissioned as a Pilot Officer on probation (emergency) on 4 December 1942 (London Gazette 23 February 1943). He was confirmed in this appointment and promoted to Flying Officer (war subs) on 4 June 1943 (London Gazette 23 July 1943)

He was awarded the Distinguished Flying Cross on 7 September 1943 as promulgated in the London Gazette of the same date.

He was granted the substantive rank of Flight Lieutenant with effect from 4 June 1946 (London Gazette 13 January 1948). 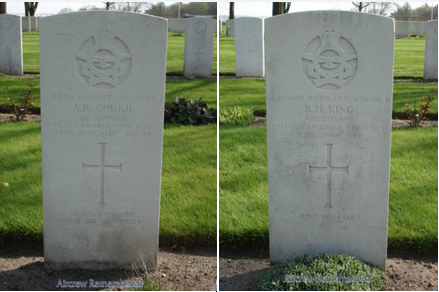 At the going down of the sun, and in the morning we will remember them. - Laurence Binyon
All site material (except as noted elsewhere) is owned or managed by Aircrew Remembered and should not be used without prior permission.
© Aircrew Remembered 2012 - 2022 Last Modified: 05 December 2021, 12:54