Taking off at 00:03 East Moor to bomb the German city of Duisburg. 572 aircraft taking part (238 Lancasters, 142 Halifaxes, 112 Wellingtons, 70 Stirlings and 10 Mosquitoes) the fourth raid on the city so far with the others only partially successful. The marking on this raid was near perfect resulting in the bombing well concentrated.

The centre of the city and the port area just off the river Rhine (the largest inland port area in Germany) suffered enormous damage.

1,596 buildings totally destroyed, 273 people on the ground killed, 4 steel factories were damaged. In the port area, 21 barges and 13 other ships (18,921 tons) were sunk with a further 60 ships (41,000 tons) damaged) Duisburg was considered not necessary to attack again for awhile!

It didn't go all well though with Bomber Command losing some 38 aircraft during this operation. A total of 214 aircrew killed, 32 being made PoW.

Intercepted and shot down by a night fighter flown by Hptm. Hans-Dieter Frank of 2./NJG1, his 23rd claim of the war at 02:29 hrs. crashing at Zeist (Utrecht) Holland. 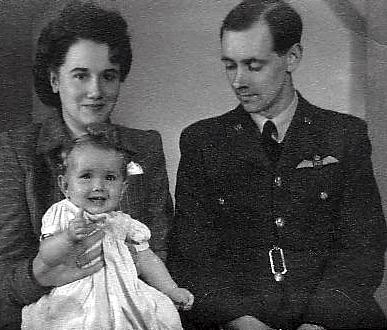 Came from Hook, near Kingston and his family ran a successful fish restaurant in Notting Hill called “Geales”. Still vey much trading today with another restaurant open in Chelsea Green using the same name.

Left a young wife and a nine month old daughter. When news of his death reached the family, his devastated parents flew to Holland to try and find out more details, finding the visit most distressing.

Update - 05th June 2017: The 'Geales' restaurant replied when we informed them of their history regarding this pilot:"We can't thank you enough for this wonderful and incredibly useful part of our history. Speak soon we hope". So, we have offered them a framed document regarding this loss to display for the public. Await their reply.

Researched June 2017 by Linda Ibrom for Aircrew Remembered. Photo of Basil Geale and family to Jackie Bradley, his daughter. Also to Robert McAllister for grave photographs - used with permission. For further details our thanks to the following sources.

At the going down of the sun, and in the morning we will remember them. - Laurence Binyon
All site material (except as noted elsewhere) is owned or managed by Aircrew Remembered and should not be used without prior permission.
© Aircrew Remembered 2012 - 2022 Last Modified: 23 March 2021, 21:16