Wellington T2515 took off from Alconbury at 19:50 hours as part of an eight aircraft sortie against the channel ports of Calais and Boulogne. Near the target area the aircraft was hit by a Luftwaffe flak Unit and crashed near the village of Wimille, 5 km north of Boulogne killing all aboard.

This very young and inexperienced crew, who ranged in age from 19 to 21 years of age, were all on their very first operational mission when they were lost. 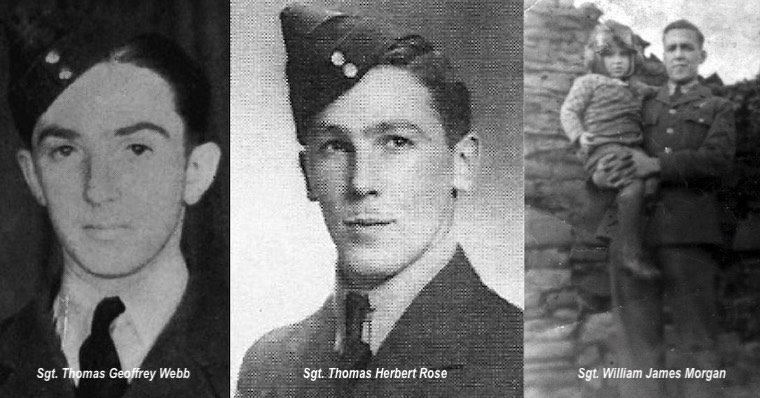 The Rose family would suffer a further loss when a second son, Fl/Sgt. Donald Irwin Rose, was killed in the crash of Halifax LK649 during a raid on Berlin on the night of 28/29 January, 1944. Page of remembrance also on this website. 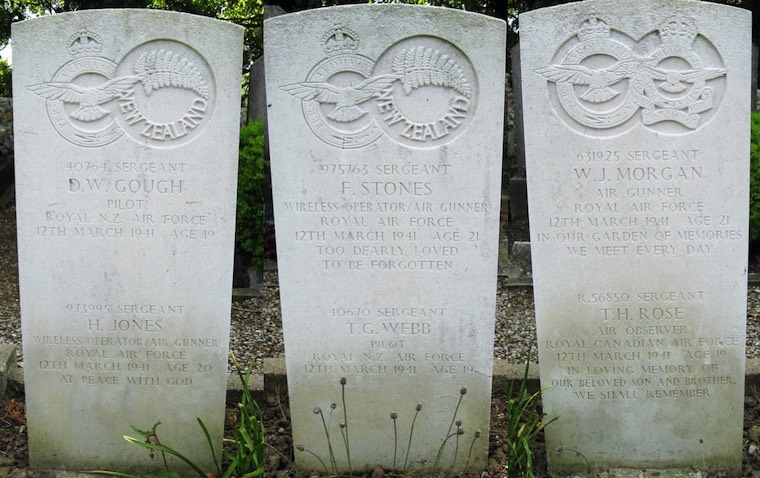 Burial Details:
Sgt. Douglas William Gough, Wimille Communal Cemetery. Born on the 21st September 1921 at Masterton, the son of William Henry Charles and Violet (née Jimmieson) Gough of Palmerston North, New Zealand. Prior to enlisting on the 12th March 1940 worked as a postal messenger and assistant for P and T Department. A total of 277 flying hours logged and on his 1st operational sortie.

Sgt. Thomas Geoffrey Webb, Wimille Communal Cemetery. Born on the 13th November 1921 at Auckland, the son of James Herbert and Beatrice Annie Webb (née Bending) of Mt. Albert, Auckland, New Zealand. Enlisted on the 13th February 1940 and prior to this worked as a warehouseman for Chas L. Stevenson Ltd. A total of 245 flying hours logged and on his 1st operational sortie.

Sgt. Thomas Herbert Rose, Wimille Communal Cemetery. Further information: Son of Herbert Cecil and Annie Marion Rose of Stony Mountain, Manitoba, Canada. Tom Rose, born in Gladstone, Manitoba on 6 April, 1921. The family moved to Stony Mountain where he attended the Stony Mountain School like his younger brother Don. Whereas his brother was more the mischievous one, Tom was rather serious and quiet. He developed an artistic talent in drawing and painting and was also an accomplished carver and model maker. At a craft exhibition in 1937 sponsored by the T. Eaton Company in Winnipeg, he submitted a model of the Queen Mary winning first prize. Like Don, he was very active in sports as a pitcher in baseball and also played ice hockey with several teams.

When war broke out it was Tom’s ambition to join the airforce but due to an eye problem he was at first rejected. When this was corrected he reapplied and was accepted in April 1940 being posted to No.1 Initial Training School in Toronto later that month. From No.1 ITS, he went to No.1 Air Observer’s School at Malton graduating from the first class trained under the British Commonwealth Air Training Plan as an Air Observer on 25 October, 1940. Arriving in England that November, Tom was posted to No.20 OTU at Lossiemouth in Scotland where he completed his training on 8 March, 1941.

At the going down of the sun, and in the morning we will remember them. - Laurence Binyon
All site material (except as noted elsewhere) is owned or managed by Aircrew Remembered and should not be used without prior permission.
© Aircrew Remembered 2012 - 2021 Last Modified: 01 February 2020, 01:59