Base: Oudna One, North Africa

Took off at 16.53hrs to bomb a ball bearing factory in Turin, Italy. A total of 76 aircraft took part in the mission. The weather conditions were extremely poor with low cloud and very strong winds which hampered navigation.

This aircraft crashed 1,550 meters up on Monte Molinatico a mountain near the small towns of Pontremoli and Parma in North Italy.

This was not a successful raid with only 9 of the 76 aircraft reaching the target and with a huge loss of 17 aircraft. 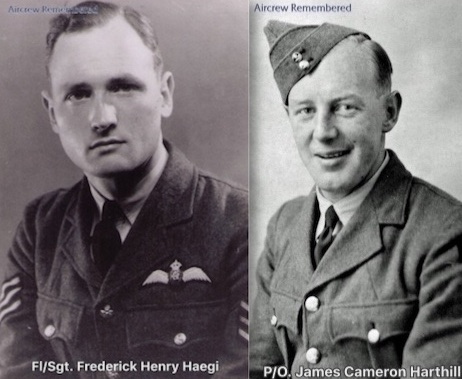 Every year the people of Bratto hold a memorial service to the crew at the local church where the crew were originally buried. With the microphone is Professor Caterina Rapetti and it is belied that the lady on her left is one of the people who buried the crew in 1943. (Courtesy Paul Pini)

The pictures above are part of Wellington HZ552 which had been removed from the crash site shortly after the accident and had remained in a loft until 2013. The first two pictures are of the oxygen tank dated 1942 and the third picture is of the exhaust manifold. (Courtesy Paul Pini) 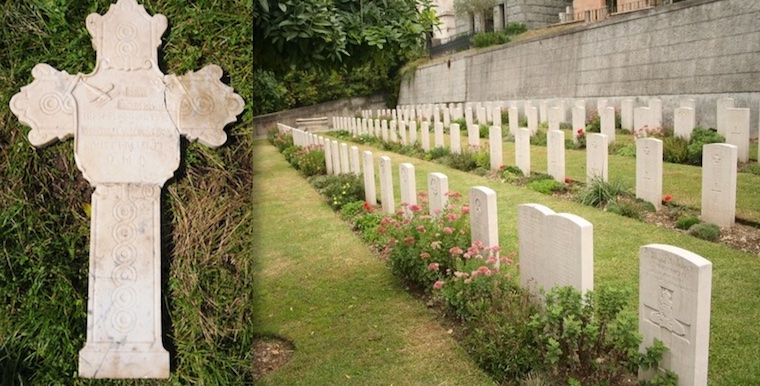 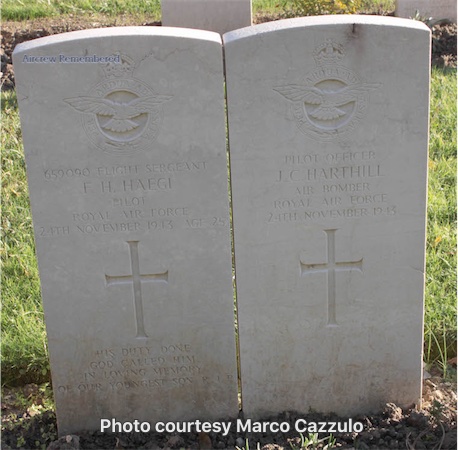 These airmen were initially buried by Eugenio Necchi Ghiri, Alberto Necchi Ghiri, Agostino Corsini and Marie and Cesare Schia all residents in Bratto in a comrades grave on 29th November 1943.

A Catholic blessing was given by the Parson of Bratto - Don Antonio Scortini.

Researched by: Sandra Colley and Kate Tame and dedicated to the relatives of the crew, With thanks to: Professor Caterina Rapetti, Culture Secretary for Pontremoli the region of the crash site. Also to Paul Pini, has a house in the next village (Braia) to the crash site and attended the ceremony at Bratto Church in 2010 where the cross was remounted. To Jill and husband Pat Housden, niece of Fl/Sgt Andrews, Mark Haigh nephew of Fl/Sgt. Haegi and to Marco, who has written a book (only in Italian at the moment), about various crash sites in the region with three pages dedicated to this crash. Also thanks to Marco Cazzulo who sent us the grave photograph in December 2016.

At the going down of the sun, and in the morning we will remember them. - Laurence Binyon
All site material (except as noted elsewhere) is owned or managed by Aircrew Remembered and should not be used without prior permission.
© Aircrew Remembered 2012 - 2022 Last Modified: 21 March 2021, 16:20