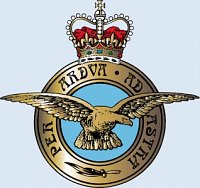 We welcome contact from the family in order to place additional information and perhaps a photo of John.

Gp/Cpt. John Raymond Jeudwine had over 2,200 flying experience but it has been established that he had almost none when he took this Typhoon up. He had been up for only 6 minutes when he attempted a  slow troll to the left at 3,000 ft. The aircraft entered into a spin to the right and then probably stalled during attempted recover from the inverted position.

No evidence that there had been any structural failure of the airframe and that it appeared that the pilot had not attempted to abandon.

Exact location of crash not known, but a map of the area.

"Wing Commander Jeudwine has now completed a total of 67 operational sorties, of which 33 were carried out by daylight in the Far and Middle East. He has done 14 sorties since he was recommended for his last award.

"Since the beginning of May 1944, he has been employed as a Group Controller (Master Bomber), in which capacity he has carried out twelve sorties including the attack against Brunswick on 22/23 May 1944. This role necessitated his remaining in the immediate vicinity of the target at low altitudes for very long periods, thus exposing himself unduly to the enemy ground air defences. It is worthy of note that his last two sorties were undertaken whilst he was employed as Air Staff Officer at this Headquarters - a Staff appointment which normally does not place any obligation on the holder to participate in operational flying; moreover on both these occasions he flew in a type of aircraft new to this Group and to himself, i.e. the Lightning, single-seater, which calls for the most accurate D.R. navigation.

"It is difficult to single out any particular mission or special commendation. On all of them he has displayed a keen relish for operations, an unusual determination to complete his allotted task successfully, and exceptional gallantry. On many occasions he had to contend with heavy anti-aircraft fire and potential attacks from enemy fighters, but these did not deter him from remaining in the target area until his job was done. Two typical examples were the attacks against the ammunition depot at Salbris (7/8 May 1944) and the river bridges at Caen (12/13 June 1944).

”The first attack was carried out under conditions of full moon and in the face of strong enemy fighter opposition. Nevertheless, Wing Commander Jeudwine remained in the target area for over 30 minutes, and whilst on his own bombing run was twice attacked by a Dornier 217. Displaying his customary fortitude he completed his bombing run and then proceeded to adopt such effective combat manoeuvres as to render the enemy fire nugatory.

"On the second occasion he was flying in a Mosquito, and on reaching the target area his port engine was hit by anti-aircraft fire and put out of action. Notwithstanding the act that he was then at a height of only 1,000 feet and in the midst of a very "hot" anti-aircraft area, he postponed his return to Base until he had handed over control to his Deputy and had satisfied himself that the attack was progressing smoothly.

"For his outstanding operational record, and his exceptional conduct, particularly during the past three months, this gallant officer is strongly recommended for the immediate award of the Distinguished Service Order."

A book has been published on this amazing WW2 pilot in 1999 and is still very much available. ‘Global Warrior’ written by Alain Charpentier with additional information supplied by the son of the pilot, Geoffrey Jeudwine. Published by Lionel Lacey-Johnson. ISBN: 9780953641802. 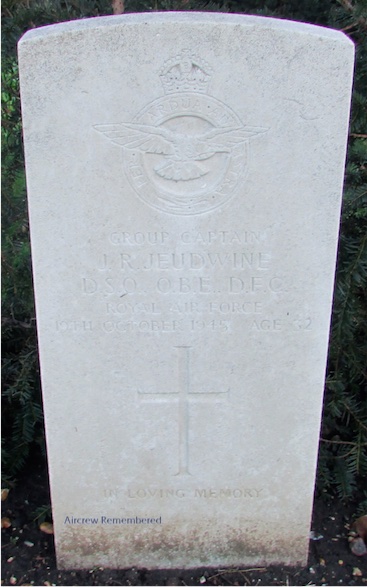 Left: The grave of Gp/Cpt. J.R. Jeudwine as visited by Aircrew Remembered in February 2015 - a simple Commonwealth War grave in a corner of a cemetery - they wanted him to be remembered.

At the going down of the sun, and in the morning we will remember them. - Laurence Binyon
All site material (except as noted elsewhere) is owned or managed by Aircrew Remembered and should not be used without prior permission.
© Aircrew Remembered 2012 - 2022 Last Modified: 21 February 2015, 23:34