During a fighter Sweep operation P/O. Macqueen was flying Spitfire W3312 when it suffered an engine failure west of Deal - the pilot did bale out but low low for the parachute to take effect, the aircraft crashed onto the Goodwin Sands in the English Channel. 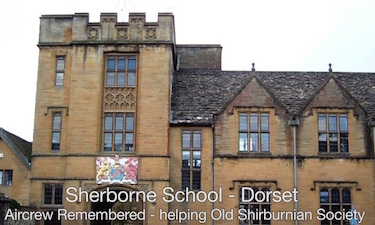 Sherborne School, Dorset - Any further information that you are able to assist them with fallen former pupils from all wars, we would be pleased to pass onto them.

Obituary, 'The Shirburnian', December 1944: 'Nowell Reece Macqueen, son of A.R. Macqueen, Esq., Greengates, Littledown Road, Bournemouth came to Sherborne in 1936. I first made his acquaintance in the preparatory school stage when I saw him playing the part of 'Dick Dead Eye' in HMS Pinafore, at Wychwood Preparatory School, Bournemouth. At Sherborne he spent three very happy years travelling up the school at a normal rate of progress, making a host of friends and living the normal healthy life of a public school boy with no extravagances and no serious misdemeanours. But he left while he was still quite young on the outbreak of war. He served in the RAF and must have been in one of the first contingents to be trained in Canada. He quickly made his mark as a skilled Pilot and returned to England after six months absence; one of his first acts on returning was to visit his old school proudly displaying his newly acquired wings. Shortly afterwards he was posted to an operational squadron and, it seemed but a few days after his visit to Sherborne that we heard the sad news that he had been shot down within the first month of his active service over the Channel. He leaves behind him many happy memories of a very gallant, cheerful and friendly spirit.'

With thanks to Sherborne School Archives for additional information. Other sources as quoted below.

At the going down of the sun, and in the morning we will remember them. - Laurence Binyon
All site material (except as noted elsewhere) is owned or managed by Aircrew Remembered and should not be used without prior permission.
© Aircrew Remembered 2012 - 2021 Last Modified: 09 March 2015, 22:55