Following reports of enemy aircraft build up over the Channel at Cherbourg. 59 Squadron were ordered to bomb the Luftwaffe airfield at Querqueville in three waves.

Taking off at 15:00 hrs along with 12 others from the squadron. 236 Squadron were ordered to act as escort.

Anti-aircraft fire was immense and two fighters from 236 squadron were shot down. Bf109s also managed to take off and were seen to enter the battle. No claims have been verified on who claimed the 59 Squadron loss. 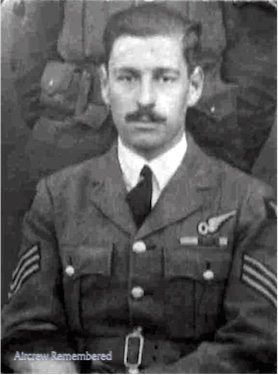 59 Squadron were unaware that their Commanding Officer and his crew failed to return with them.

The bodies of the crew were washed up on French beaches and buried at various French cemeteries.

Graves of two of the crew as photographed by our Kate Tame in 2011.

With thanks also to Paul Brooker, who has researched the losses on his village war memorial in Smarden, Kent, England and supplied us with the photo of P/O. Davis.

At the going down of the sun, and in the morning we will remember them. - Laurence Binyon
All site material (except as noted elsewhere) is owned or managed by Aircrew Remembered and should not be used without prior permission.
© Aircrew Remembered 2012 - 2022 Last Modified: 10 March 2021, 20:41