Taking off from RAF Skellingthorpe in Lincolnshire at 23:22 hrs to bomb the flying bomb site at Saint-Leu-d’Esserent. Part of a series of night bombing attacks on these facilities during the Normandy invasion period.

On this operation some 231 Lancasters with 5 Mosquitoes took part in what was described as a successful operation with accurate bombing. It came at a cost with 13 Lancaster failing to return. 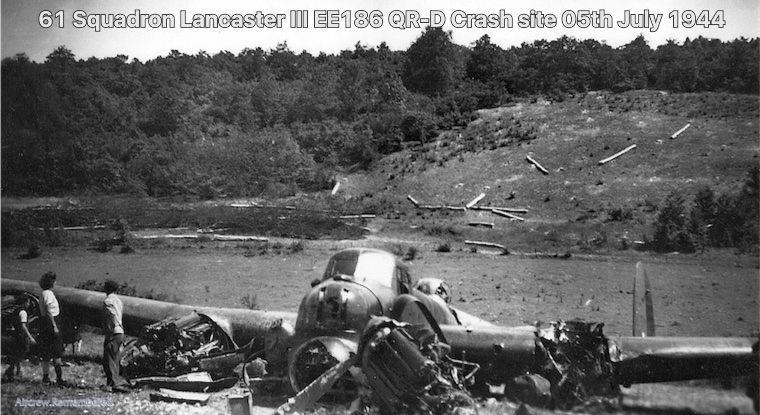 It is thought that Lancaster EE186 was shot down by the night fighter crew of F/W. Blank of 8./NJG5 at 01:53 hrs coming down some 2 km. North of Harquency, France - his first and only claim of the war from which he survived. (See Kracker Luftwaffe Archive on this site)

None - all are survived.

Researched and dedicated to the relatives of this crew with thanks to sources as shown.

At the going down of the sun, and in the morning we will remember them. - Laurence Binyon
All site material (except as noted elsewhere) is owned or managed by Aircrew Remembered and should not be used without prior permission.
© Aircrew Remembered 2012 - 2022 Last Modified: 30 March 2021, 14:37