Taking part in a Fighter Affiliation and bombing Exercise - during the training sortie a photoflash bomb, which had hung up in the bomb bay, ignited causing a major fire in the aircraft. Four members of the crew managed to bale out prior to the aircraft crashing near the Cement works on Gainsthope Road close to Kirton In Lindsey. The fire intensified on impact and the aircraft was totally burnt out.

Sadly, Fl/Sgt. Roy Rogers landed in a flooded quarry and drowned. The remaining 3 crew landed safely with no reported injuries.

Following the incident it was discovered that the bomb that had ignited had hung up on a previous sortie and failed to be reported. The bomb aimer knew he had 7 bombs on board rather than the authorised 6 but failed to check for hang ups after the bombing phase. The safety officer also failed in his duties in that he had not briefed crews fully on safety drills and that the crew were not wearing Mae West life jackets for the operation. 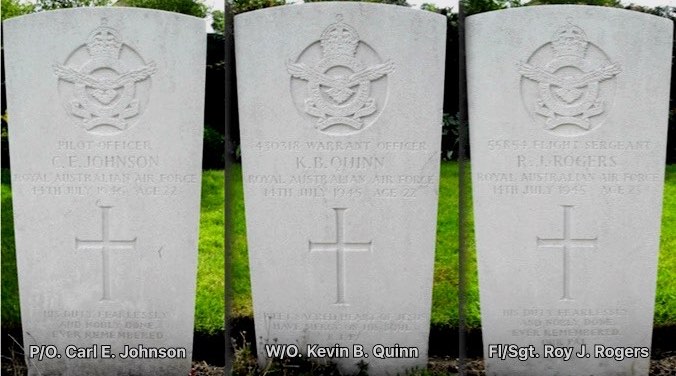 Researched and dedicated to the relatives of this crew with thanks to sources as shown. Also to Len, for grave photographs. With thanks to Roy Bell for advising us of correct name of base - May 2018.

At the going down of the sun, and in the morning we will remember them. - Laurence Binyon
All site material (except as noted elsewhere) is owned or managed by Aircrew Remembered and should not be used without prior permission.
© Aircrew Remembered 2012 - 2022 Last Modified: 06 April 2021, 10:10