Unit: No. 14 Squadron - Motto: 'I spread my wings and keep my promise', an extract from the Koran suggested by the Emir of Transjordan.

Badge: A winged plate charged with a cross throughout and shoulder pieces of a suit of armour - approved by King George VI in May 1937. The badge represents a crusader in association with the Cross of St George because of the Squadron's close First World War ties with Diospolis, Palestine, the reputed burial place of the Saint, and its location in the Middle East at the time of submission to the Chester Herald.

Air/Gnr: Not taken on operation

Formed at Shoreham in 1915, No. 14 Squadron then spent the next 25 years in the Middle East predominantly in Palestine and Jordan.

In June 1939 with war looming new officers began to arrive at Amman, Jordan for training with the squadron on Wellesleys: one of those who came was P/O. Reginald Plunkett. On 24 August the squadron was moved briefly to its war station at Ismailia in Egypt but in December 1940 with the so called "phoney war" showing no sign of coming to an end it was moved back to Amman. But by May 1940 it was becoming more and more likely that Italy would soon enter the war on the side of Germany, and with this in mind the squadron was moved to Port Sudan on 24 May.

The following month, with France all but beaten and British forces ejected from Europe, Italy seized the moment: on 10 June war was declared on Britain and France.

The very next day, 11 June, 9 Wellesleys of No. 14 Squadron were to bomb the strongly defended Massawa naval base some 300 miles south of Port Sudan. P/O. Plunkett and his Air gunner Sgt. Bernard Lloyd Trayhurn were one of the crews detailed for the raid.

Taking off at 1600 hours the force was to carry out a low level attack in three flights on the fuel dump at Otumlo airfield and other installations.

Commencing just after 1800 hours the attack was made through heavy anti aircraft fire augmented by fire from the heavy calibre guns from the Naval ships in the harbour.

Despite three of them being hit eight of the Wellesleys made it safely back to Port Sudan, the missing aircraft being that captained by Reginald Plunkett.

Unbelievably, at dawn the following morning, Reginald Plunkett landed his Wellesley at Port Sudan apparently none the worse for his delayed return.

He explained that he had followed the coast the previous night but being unsure of his position he had landed on the beach. He and Bernard Trayhurn had spent the night sleeping under the wings of the aircraft and at first light they had flown back to base.

On 14 June at about 1500 hours two Wellesleys took off from Port Sudan. Flying one of them was B Flight Commander, Flight Lieutenant Anthony Thornburn Irvine (2), whilst the other Wellesley, K7743, had Pilot Officer Reginald Plunkett at the controls. Neither aircraft had any other airmen on board.

It later transpired that Fl/Lt. Irvine held a belief that the Wellesley would make a good single-seater dive bomber and having discussed the possibility with Plunkett, the pair had determined to test the theory in an attack the Acico petrol installation at Massawa.

After more than five hours Irvine arrived back at Port Sudan but alas Plunket failed to return and despite a search the following day neither he nor his aircraft were found.

Irvine stated that they had dropped their bombs and he had last seen Plunkett heading for the coast apparently undamaged.

During the return they had been attacked by a unit from 412 Squadriglia in Fiat CR.42. The Italian Biplane ace, Mario Visentini (3) claimed to have shot him down at 19:15 hours, the Wellesley crashing into the Red Sea.

Some reports state that the two pilots took off on an unauthorised operation after a bet in the squadron mess that they could achieve this operation - without one of them taking air gunners. We are unable to confirm this.

Researched for the Wimbledon College Roll Of Honour. P/O. Plunkett having been a former pupil.

BIOGRAPHICAL DETAILS OF THE PILOT

The family later moved to Kitale in Kenya.

Reginald P.B. Plunkett was granted a Short Service Commission as an Acting Pilot Officer on probation with effect from and seniority of 4 June 1938 (London Gazette 24 June 1938). He was confirmed in this appointment and graded as a Pilot Officer on 15 April 1939.

An ex pupil of Wimbledon College he is commemorated on the College Roll of Honour.

P/O. Reginald Patrick Blennerhassett Plunkett having no known grave is commemorated on the Runnymede Memorial - Panel 9.

Strange that he is remembered on the Runnymede Memorial rather than the Alamein Memorial.

(1 ) Sgt. Bernard Lloyd Trayhurn age 28, was missing believed killed on 3 July 1940 whilst flying as the Observer of Wellesley L2652 together with pilot F/O Samuel Gustav Soderholm 40194 RAF. The aircraft was shot down by Capitano Mario Visintini while on reconnaissance.

Sgt. 562891 Bernard Lloyd Trayhurn, an Old Haltonian, having no known grave is commemorated on the Alamein Memorial.

(2) Squadron Leader Anthony Thornburn Irvine MiD 36090 RAF age 27 and then of 211 Squadron failed to return from a raid over Southern Serbia on 13 April 1941. He is buried at Phaleron War Cemetery, Greece. 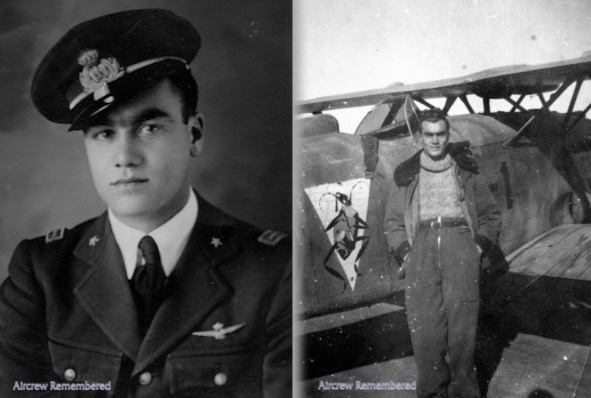 He is credited with 16 confirmed air victories (20, according to other sources) and five probables, plus two victories achieved during the Spanish Civil War. He achieved all his air victories flying the Fiat CR.42 biplane.

On 11 February 1941, Visintini claimed a Hurricane, over Keren, probably an aircraft from No. 1 SAAF Squadron that had 11 fighter aircraft on patrol, that day. Two of the British aircraft clashed with Fiat CR.42s, then the Hurricane of Lieutenant S. de K. Viljoen was forced to land. Visintini landed on his airfield, refuelled and took off again, searching for his faithful wingman, Luigi Baron (an ace with a score of 12 kills, at the end of the war), who had been forced down by a storm. Because of the same inclement weather Visintini's Fiat crashed into Mount Bizen, near Nefasit, about 24 kilometers from Asmara, Eritrea.

Researched for the Wimbledon College Roll Of Honour - Aircrew Remembered have offered to provide basic information for the school records. With thanks to some sources quoted below.

At the going down of the sun, and in the morning we will remember them. - Laurence Binyon
All site material (except as noted elsewhere) is owned or managed by Aircrew Remembered and should not be used without prior permission.
© Aircrew Remembered 2012 - 2021 Last Modified: 19 September 2017, 15:01