Joseph Sarnoski - USAAF Gunner Who Fought To The End

Sarnoski was the second-oldest in a family of seventeen children belonging to a Polish coal miner in Simpson, Pennsylvania, just north of Carbondale. His father's health began to fail and he left the coal mines to begin farming where Joseph Sarnoski worked hard to help keep the farm operating and make ends meet. The family later moved to nearby White's Crossing, where Sarnoski graduated from high school. Though the responsibility of alternating between education and farm work left little free time, Sarnoski developed an interest in aviation.

On March 7, 1936, Sarnoski enlisted in the United States Army as an air cadet, entering service in Baltimore, Maryland. After basic training he was assigned to the 2nd Bomb Group at Langley Field, Virginia, with additional training at Lowry Field, Colorado, where he completed the Advanced Aircraft Armorer's Course in 1939.

In 1940 he was discharged from the Regular Army to reenlist in the Air Corps in order to train as an air crewman, completing the Bombsight Maintenance Course. Sarnoski was promoted to Sergeant, made an enlisted bombardier in B-17 Flying Fortress bombers, and returned to Langley as part of the 41st Reconnaissance Squadron, attached to the 2nd Bomb Group.

While stationed at Langley Sarnoski met and married his wife, Marie, and was promoted to Staff Sergeant early in 1941. In September 1941 Sarnoski was transferred to Dow Field, Bangor, Maine, as a bombing instructor with the 65th Bombardment Squadron, 43rd Bomb Group, newly equipped with B-17s. With the entry of the United States into World War II, Sarnoski's group was transferred to Australia on January 13, 1942, where in March he was promoted to technical sergeant. Sarnoski continued to act primarily as an instructor but did fly some combat missions and earn promotion to Master Sergeant. In November 1942, now based at Port Moresby, New Guinea, he volunteered to become part of a combat crew put together by 1st Lt. Jay Zeamer Jr.. (right)

Sarnoski was awarded the Silver Star in combat and by recommendation of his pilot received a battlefield commission to second lieutenant on May 24, 1943.

On June 16, 1943, Sarnoski, normally a bombardier, volunteered to fly as one of the crew of B-17E 'Old 666' on an unescorted mission to Buka, a small island off the north coast of Bougainville, a 1200-mile round-trip mission, to photograph Japanese installations and map the west coast of Bougainville as far south as Empress Augusta Bay in preparation for Allied landings scheduled for early November 1943 in World War II. Apparently unbeknownst to Allied intelligence, the Japanese had moved about 400 fighters into the Solomon Islands on June 15.

The photo reconnaissance mission was without incident, although the B-17's crew reported observing 20 fighters taking off from Buka airfield. The bomber continued south to the mapping run and shortly before its completion, the B-17 was intercepted by five Japanese fighters attacking from the front.

The B-17 eventually landed successfully in New Guinea after Sarnoski died.

Ultimately Zeamer and Sarnoski both receive the Medal of Honor, Joe posthumously in December by his widow Marie, Jay at Army Air Forces headquarters in Washington, D.C., in January 1944. It is only the third time two members of the same crew have received the Medal of Honor for the same mission. The rest of the crew on that mission receive the Distinguished Service Cross, just one step removed from the Medal of Honor. That has never happened before or since, and it makes the 16 June 1943 mission over Bougainville the most highly decorated mission not just of World War II, but of any American war. When added to the multiple decorations they’ve already earned individually, it also makes the Eager Beavers the most highly decorated air crew in American history.

This mission has been recreated by The History Channel as part of Episode 12 of its series Dogfights, 'Long Odds', first broadcast January 19, 2007.

On January 6, 1949, two days after the first interment at the new cemetery, Sarnoski's body was returned from its burial location on New Guinea and interred in Section A, Grave 582 of the National Cemetery of the Pacific at Honolulu, Hawaii. 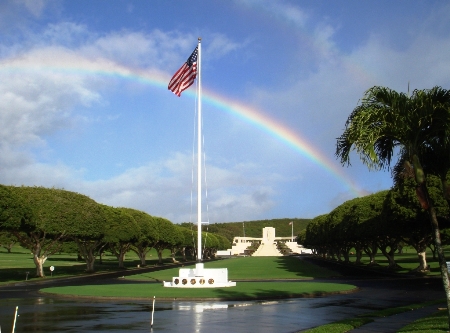 National Memorial of the Pacific, Honolulu


Merli-Sarnoski State Park, located in Fell Township (just outside of Carbondale), Pennsylvania, was co-named for Joseph Sarnoski and Gino J. Merli in 2002; both were World War II Medal of Honor recipients and Lackawanna County residents.

Citation for Medal of Honor

For conspicuous gallantry and intrepidity in action above and beyond the call of duty. On 16 June 1943, 2d Lt. Sarnoski volunteered as bombardier of a crew on an important photographic mapping mission covering the heavily defended Buka area, Solomon Islands. When the mission was nearly completed, about 20 enemy fighters intercepted. At the nose guns, 2d Lt. Sarnoski fought off the first attackers, making it possible for the pilot to finish the plotted course. When a coordinated frontal attack by the enemy extensively damaged his bomber, and seriously injured 5 of the crew, 2d Lt. Sarnoski, though wounded, continued firing and shot down 2 enemy planes. A 20-millimeter shell which burst in the nose of the bomber knocked him into the catwalk under the cockpit. With indomitable fighting spirit, he crawled back to his post and kept on firing until he collapsed on his guns. 2d Lt. Sarnoski by resolute defense of his aircraft at the price of his life, made possible the completion of a vitally important mission.

Presented to his Widow Marie Sarnoski on October 25, 1945

All site material (except as noted elsewhere) is owned or managed by Aircrew Remembered and should not be used without prior permission.
© 2012 - 2022 Aircrew Remembered Last Modified: 24 March 2021, 21:28
If you would like to comment on this page, please do so via our Helpdesk. Use the Submit a Ticket option to send your comments. After review, our Editors will publish your comment below with your first name, but not your email address.