Although the period known as the Battle of Berlin had ended by the end of January, Bomber Command staged one last major raid against the city on the night of 24/25 March 1944.

Of the 811 aircraft that took part in the sortie, 72 failed to return. Very high winds from the north blew the bombers off course that night which afterwards became known as ‘the night of the strong winds’. The lack of an accurate forecast and subsequent notification to the crews resulted in the scattering of the bomber stream to the southwest of the target.

Towns and villages well outside the city boundaries were hit as the markers drifted in the strong wind which accounted for 30 civilian deaths. In the southwest suburbs of Berlin, many houses were destroyed and 150 people were killed. Some industrial premises were damaged as well as five military targets the most important being a depot of the Waffen SS. 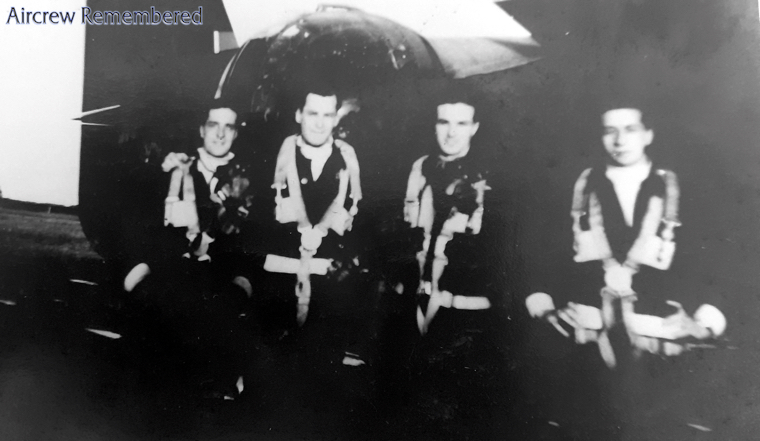 Above: Thought to be some of the crew with Sgt. William Alexander Buchan on the left (courtesy Elaine Hunton)

LM718 took off from RAF Lissett in Yorkshire at 18:55 hrs to join the bomber stream. However, at 22:40 hrs they called base indicating serious engine trouble with a port and a starboard engine and that they were abandoning the sortie and returning. 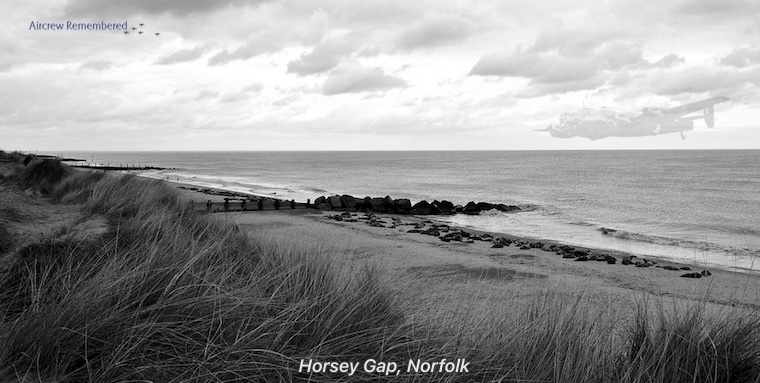 The following is an extract from the Court of Inquiry into the accident to Halifax II LW718 which occurred on the 24th March 1944.

“The aircraft was returning from operations on the two engines, one on the port and one on the starboard but whether inboard or outboard engines could not be determined owing to the state of the engines after the crash. The pilot flew in over the coast, and on evidence apparently at the same height above the cloud, that is above 3,500 ft. The aircraft then dived into the ground with engines running at an angle almost to the vertical. This being indicated by the crater and the comparatively small amount of wreckage scattered above the ground The aircraft crashed at 23.16 hrs on 24th March 1944. In evidence, six members of the crew were killed. The seventh member of the crew, Fg Off. Hindley had not been recovered at the time but his body was later retrieved from the wreckage

No cause can be given for this sudden dive into the ground unless the pilot temporarily lost control while attempting to break cloud, but one hesitates to speculate in this case where this is such a lack of evidence of any kind”.

Also lost from the Squadron this night:

Halifax III LW721 NP:S Flown by WO2. Allan Ross Van Slyke R121701 (Plt Off. J85605) RCAF Killed with 2 other members of his crew, remaining 4 taken PoW. They were on their homebound trip when shot down by a Ju88, crashing at Pausin, North West of Berlin.

Four of this crew escaped injury when on an operation to Leipzig they were hit by an incendiary bomb hit their Halifax HR716. The pilot put the aircraft into a dive and the wind extinguished the flames. The pilot managed to return to base at RAF Lissett at 08:16 hrs on the 04th December 1943.

Five of the crew were buried on the 31st March at Cambridge City Cemetery - the others had private burials in their hometowns. 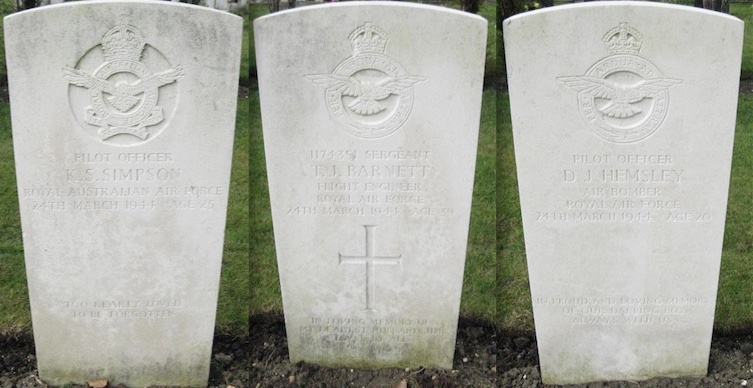 Fg Off. Norman Hindley DFC. Morden Cemetery. Section. G.4. Grave 5703. Grave inscription: "IF LOVE COULD HAVE SAVED THEY WOULD NOT HAVE DIED". Son of Walter and Sarah Hindley, of Merton, London, England and husband of Maisie Patricia Hindley.

DFC awarded to Fg Off. Hindley whilst with 158 Sqn. Promulgated in the London Gazette 21st April 1944 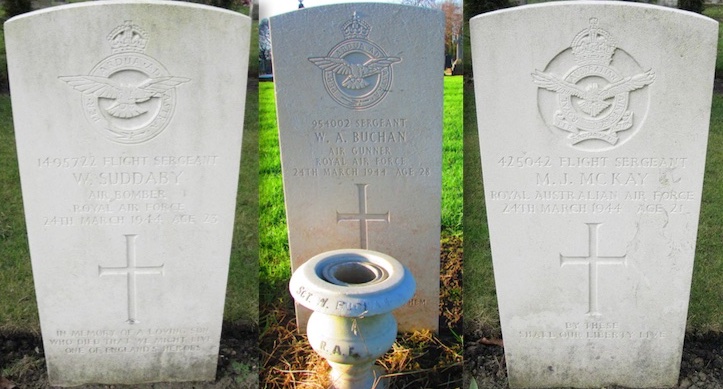 Flt Sgt. Walter Suddaby. Cambridge City Cemetery. Grave 13558. Grave inscription: "IN MEMORY OF A LOVING SON WHO DIED THAT WE MIGHT LIVE. ONE OF ENGLAND'S HEROES". Son of Richard and Caroline Suddaby, of Hull, England.

Sgt. William Buchan. Newcastle-Upon-Tyne Cemetery (St. Andrews and Jesmond) Section D. Cons. Grave 374. Grave inscription: "AT THE GOING DOWN OF THE SUN AND IN THE MORNING WE WILL REMEMBER THEM". Son of William Alexander and Martha Buchan, of Newcastle-on-Tyne, England. 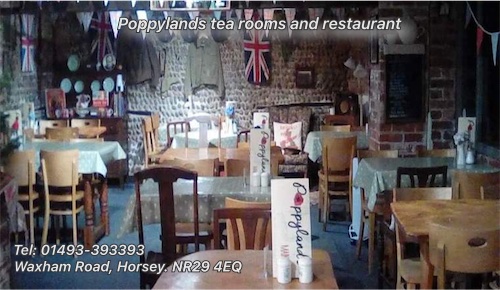 Researched by Kelvin Youngs (Webmaster) (Jun 2018) and dedicated to the relatives of this crew. Also to 'Poppylands' at Horsey who hope to place a memorial at some stage for the crew. Court of Enquiry findings and update to the narrative by Aircrew Remembered (Feb 2022). Also to Elaine Hunton (née Buchan) for the crew photo. Other sources as quoted below:

At the going down of the sun, and in the morning we will remember them. - Laurence Binyon
All site material (except as noted elsewhere) is owned or managed by Aircrew Remembered and should not be used without prior permission.
© Aircrew Remembered 2012 - 2022 Last Modified: 26 February 2022, 16:58