REASON FOR LOSS:  Took off at 21:08 hrs from RAF Faldingworth to bomb Stettin.

On the way towards their target, across Jutland in northern Denmark, the crew saw a burning four-engined plane diving steeply. In just a few seconds afterwards they were attacked by German night fighter. The air gunners of PA163 shot the Bf110 down over Grove-Kastrup. The injured Luftwaffe crew managed to crash land the Bf110.

Again over Jutland they were attacked by the Luftwaffe night fighters at just past midnight.This is thought to be Ofw. Schmitz of 3./NJG7 with the combat taking place at 3,500mtrs over Viborg at 00:05hrs. (Not confirmed - but possible)

The pilot tried to evade the attack by sudden dive but the next series of bullets hit the plane`s fuselage and wings. Soon the explosion tore the plane into pieces. The crew remained in their positions and according to eye witness accounts, continued to fire at the attackers until the moment of the crash. The aircraft was recovered in July 1945 by the Danish Navy and they discovered the body of Fl/Sgt. Jozef Rutkiewicz still slumped over his guns.(2) 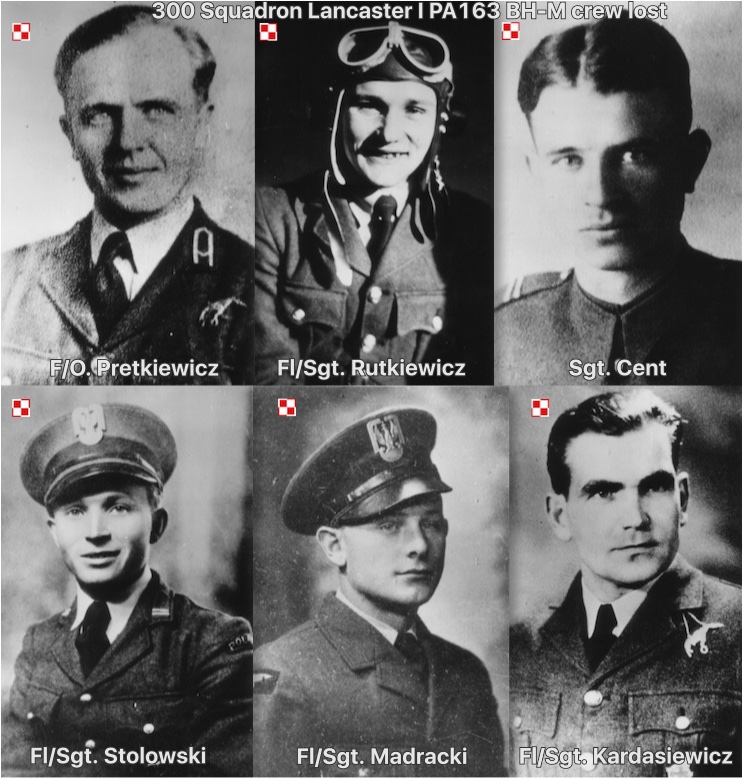 Fl/Lt. Wasik was hurled out from the exploding plane. By instinct he managed to pull the parachute handle and descended to Lovns Bredning lake. Soon, with help of a Danish farmer Mr. Gravesen-Nielsen from a nearby village – Aalestrup. He was then contacted by local resistance and within the next few days the whole escape route was ready, so on 8th of September, Fl/Lt. Wasik was picked up by one of local fisherman with whom he crossed the sea and landed in Sweden near Varberg. After being interrogated for a few days in the British Embassy he finally left on the 27th of September from Stockholm for England by air. It was his second successful evasion from capture.

(1) The first time on 27/28th April 1942. He was shot down over Belgium in Wellington IV BH-W Z1276 on their way home from Cologne. This is thought to be by either Oblt. Reinhold Eckardt of 7./NJG3 or Hptm. Herbert Bonsch (probable - but not confirmed). The whole crew fortunately bailed out and all but two evaded capture. Fl/Lt. Wasik made his route back home through France, Switzerland, and finally Spain, where he was captured by Franco`s police and sent to prison for six months released, then later rejoined his unit once again this time via Gibraltar. He passed away age 84 on the 31st October 2000 in California, USA.

(2) In 1980 all six members of the crew who were killed were awarded posthumous Silver Virtuti Militari Cross.

Crew were buried at a local church cemetery at Aalestrup in Coll. grave 691-696.

Researched by Gzegorz Korcz on behalf of Aircrew Remembered for the relatives of the crew. Special thanks to: Søren C. Flensted (Denmark) and Remigiusz Gadacz (Poland) Other sources as quoted below.

At the going down of the sun, and in the morning we will remember them. - Laurence Binyon
All site material (except as noted elsewhere) is owned or managed by Aircrew Remembered and should not be used without prior permission.
© Aircrew Remembered 2012 - 2021 Last Modified: 20 December 2015, 01:39